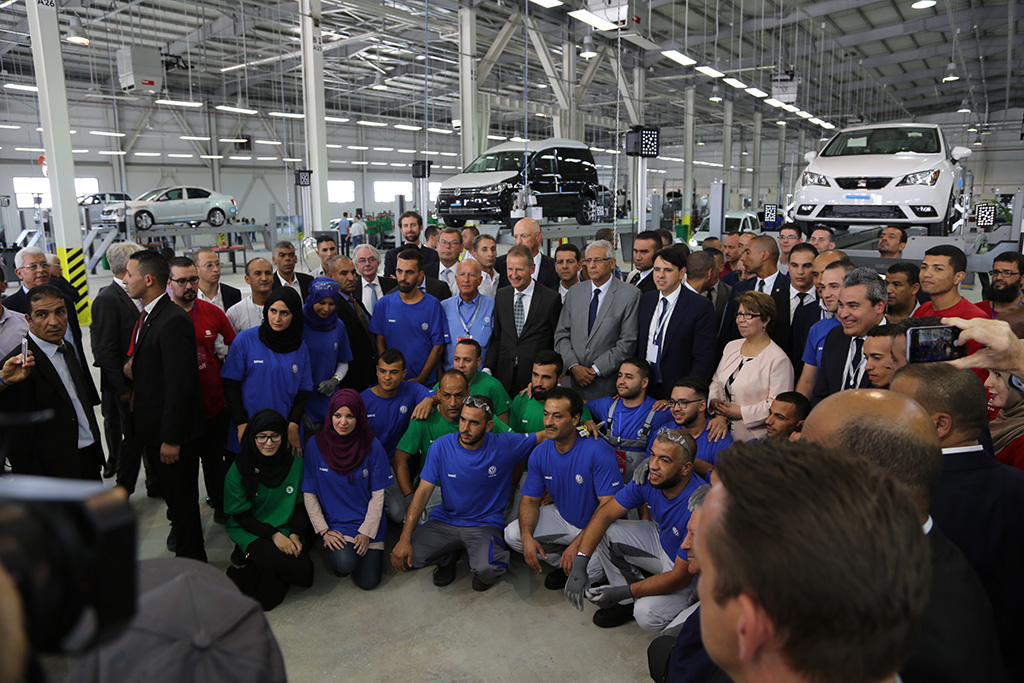 Relizane/Wolfsburg, 31-Jul-2017 — /EuropaWire/ — Today ( 27 July 2017), the Volkswagen Group and its local partner SOVAC S.P.A. inaugurated their multi-brand joint venture SOVAC Production S.P.A. The inauguration ceremony took place in Relizane, 280 kilometers to the South-West of Algiers, in the presence of the Algerian Minister of Trade and representatives of the German, Spanish and Czech embassies. The assembly plant can produce up to 200 units of the models Volkswagen Golf, Volkswagen Caddy, SEAT Ibiza and ŠKODA Octavia per day. From 2018, the Volkswagen Polo and ŠKODA Fabia are to be added to the local production portfolio.

Dr. Herbert Diess, CEO of the Volkswagen brand and Member of the Group Board of Management of Volkswagen Aktiengesellschaft, said: “The African continent offers considerable growth opportunities for the Volkswagen Group. With the new plant in Algeria, we are expanding the presence of Group brands in North Africa together with our partner SOVAC. We are bringing leading modern technology to Africa, especially with the Volkswagen Golf. In Africa too, the Volkswagen brand will write a major new success story.”

The main investor is SOVAC S.P.A., which also provides the Managing Director of SOVAC Production S.P.A. as the majority shareholder. The Volkswagen Group holds a minority stake in the joint venture company. Following the signature of the contract in November 2016 and a construction period of only 200 days, SOVAC Production S.P.A. today inaugurated a multi-brand factory with four assembly  lines. The short construction period was possible as a result of close cooperation between the Volkswagen Group brands and SOVAC.

Mourad Oulmi, CEO of SOVAC S.P.A., said: “We are very proud of our partnership with the world’s largest carmaker. We have been the official representative of the Volkswagen Group in Algeria for more than 10 years. Today, a new era in our partnership has started. From now on, SOVAC Production will be part of the Group. Together we will create an industrial network which will not only include vehicle production but also a supplier structure meeting the requirements of local production.”

Luca de Meo, SEAT S.A. Chairman of the Executive Committee, said: “Production in Algeria is a milestone for SEAT. For the first time in the history of our brand, we are making cars outside Europe. One of our objectives is to make the brand more international and North Africa is an appropriate venue for this step. There is no better market than Algeria, no better partner than SOVAC and no better vehicle than the Ibiza for starting our efforts. The Ibiza is a bestseller in Algeria and assembly at the new plant will help us significantly increase our sales figures. This is good news for Algeria, SEAT and the Volkswagen Group. For SEAT, it is an honor to lead this Group project, also in terms of the production volume.”

To ensure Group-wide quality standards, Algerian production, logistics and quality assurance employees were trained on site by experts from the Group brands. In addition, Algerian managers received a training program with a duration of several months at the production locations of the brand. This train the trainer program provides practical qualifications for foremen and managers, allowing them to explain standardized procedures to their employees and train them in these procedures. Currently, more than 550 employees work at the new factory. In the long term, up to 1,800 jobs are to be created at the Relizane plant. There will also be additional jobs with suppliers and logistics service providers

Bernhard Maier, CEO of ŠKODA Auto a.s., said: “The markets of North Africa, including Algeria, offer considerable growth potential. This is why we are especially pleased to be able to start production of the first ŠKODA models in Africa together with our partner SOVAC and other Volkswagen Group brands. We are convinced that we will be able to strengthen our presence in this region through this development.”

Dr. Josef Baumert, Member of the Board of Management of Volkswagen Commercial Vehicles responsible for Production, said: “We are pleased to be able to start Caddy production here with our partner SOVAC S.P.A. These vehicles will be produced to the same high Volkswagen standards as at all our plants throughout the world. These standards ensure the quality that customers connect with us. Producing the Caddy here is a perfect fit. As an all-rounder it offers flexible solutions for everyday challenges. With generous cargo space, extensive standard equipment, many assistance systems and frugal engines, this is a vehicle with many talents for families and companies. And with the new production facility here at Relizane, we are opening up new markets and creating local jobs.”

Volkswagen already exported the first vehicles from Germany to Algeria in small numbers in 1952. At the beginning of the 1970s, the number of vehicles exported reached several thousand units per year. SOVAC has been the distribution partner of the Volkswagen brand in Algeria since 2001. The brand was later joined by Volkswagen Commercial Vehicles, Audi, SEAT, ŠKODA and Porsche. The dealership network of SOVAC for the Volkswagen Group includes about 90 dealerships with more than 1,600 employees in Algeria. In 2015, the SOVAC Group dealerships handed over more than 30,000 Volkswagen Group vehicles to customers in Algeria.