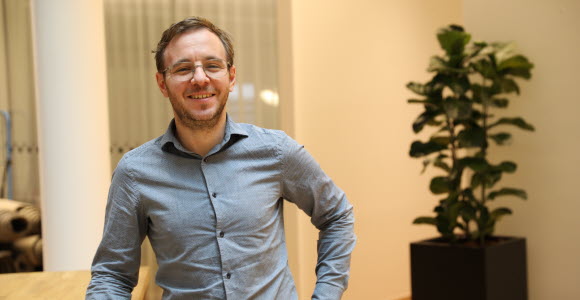 STOCKHOLM, 20-Sep-2018 — /EuropaWire/ — The IT Young Professional Programme, ITYPP, started 2008 to attract new competences to SEB. Today the program is still going strong and can proudly celebrate a decade of having over 100 skilled and engaged IT professionals joining the bank. Kamil Herzog was one of the first to participate and still has a lot to thank the program for.

Kerstin Rickardt was one of the initiators to the ITYPP in 2008 where the purpose was to attract young talents with an education that matched the needs SEB had.

– We could see that we had a lot of experienced employees, but too few young people. Through the program we wanted to give 10-12 competent people with a willingness to learn the possibility to make a difference.

Ten years later, she is proud that the program still is so popular.

– It is amazing that we still have the program and that it is rather unique in the market. I am also happy to see that SEB has succeeded in supporting the participants in growing within the company and that managers are keen to recruit people from the program.

First one joining the program

Kamil Herzog was one of the excited young IT talents that joined the program the first year. He liked that he worked 50 per cent as a system and business analyst and spent the other 50 per cent on central projects and networking with different executives in the bank.

– I remember that I felt relief being in a group of people that were also  new to work life and the same age as me. In my role as system and business analyst I was the interface between business and IT, which fitted me well since I have never seen myself as either a typical IT-guy or as a banker, he says.

When the program was finalised, Kamil continued his analyst role for a few years before deciding to take on a role as strategist within Operations, the bank’s unit for back-office support services.

– I worked with operations development planning, strategic analysis and process management. I remember it as a stimulating time where I learned a lot. I have always been passionate about breaking down complex things and trying to turn them into simple solutions.

With the employee as his primary customer

When HR announced that they needed a person to drive the digital agenda one year ago, Kamil decided to apply.

– People has always been an interest of mine. In many ways it is also more relatable for me than for example finance. I liked working within Operations, but after a few years I reached a point where I needed a new kind of challenge.

Today he is responsible of HR Direct, SEB’s internal call center for HR related questions from employees. Additionally, he is driving the HR digitalisation agenda. The reason for staying with SEB for the last decade is three folded.

Looking back at your career, how much has the ITYPP helped you?

– It gave me a great start as I got to meet many managers in the bank. I also built a network fast, and that has helped may career in the bank.

Kamil’s advice to new young IT-talents that are entering the ITYPP is to dare to challenge both themselves and managers.

– The manager might have more information than you have, and you might be wrong. But when speaking up, you show that you care and that is appreciated by both colleagues and managers.

Read more about the program