Brussels, 18-6-2013 — /europawire.eu/ — The NATO Secretary General Anders Fogh Rasmussen was in Kabul on Tuesday (June 18) to take part in the official ceremony during which President Hamid Karzai announced the fifth and final group of Afghan provinces, cities and districts to undergo transition in the coming months. “This is a day for Afghans to be proud. And I am proud to stand with you”, Mr Fogh Rasmussen said.

With this decision, Afghan security forces will take the lead for security across the country, while the role of ISAF forces shifts from a combat to a support one. The ceremony marked an important milestone in the transition process agreed by the ISAF leaders and President Karzai at the 2010 Lisbon Summit. According to the agreed roadmap, Afghan security forces are to take on full security responsibility for their country by the end of 2014.

The transition process officially started on 22 March 2011, with the announcement of the first group of provinces, districts and cities to be handed over to Afghan security leadership. “It is because of the growing strength of your forces that we have been able to reach today’s milestone,” the Secretary General said. He outlined the progress made: “Ten years ago, there were no Afghan national security forces. Five years ago, Afghan forces were a fraction of what they are today. Now you have 350,000 Afghan troops and police. A formidable forces. And time and again, we have seen them dealing quickly and competently with complex attacks.”

Senior officials from the Afghan Government, the international community and ISAF troop contributing nations attended the ceremony, which took place at the new Afghan National Defence university in Qargha, outside Kabul. Afghan soldiers and veterans, as well as young cadets from the Afghan security forces and ISAF also participated in the event.

“You today represent all the brave servicemen from this country and from our 50 nation coalition who have sacrificed so much for our joint effort.  We honour you,” Mr Fogh Rasmussen said. He paid particular tribute to the wounded servicemen from the ANSF and ISAF, and to the memory of those who have given their life. Addressing the young cadets, he said, “Afghanistan’s future is in your hands.”

The NATO Secretary General stressed that while the ISAF combat mission will be completed at the end of 2014, NATO is planning a new mission to train, advise and assist the Afghan security forces. NATO and Afghanistan, he said, will continue the journey to create a stable future “based on a new relationship, that will remain strong for years to come.” 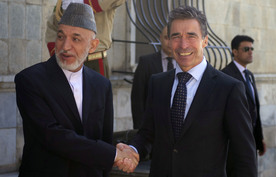