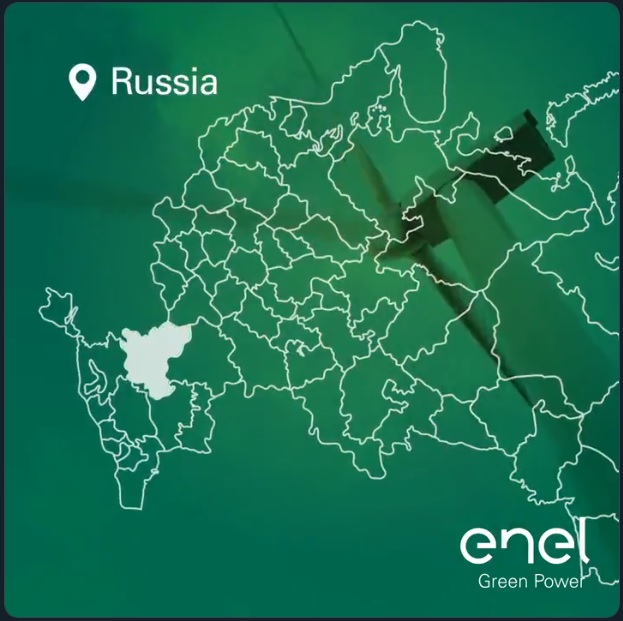 ROME/ AZOV, 24-May-2019 — /EuropaWire/ — Enel Green Power starts construction of the 90 MW Azov wind farm located in the Rostov region, Southern Russia. This is the Group’s first renewable project in Russia. The Azov wind farm, which is also the Rostov region’s first-ever renewable project, is expected to enter into service in 2020. The wind farm is owned by Enel Russia, with Enel Green Power in charge of development and construction activities after having completed the development stage.

“With this new wind project, we are embarking upon our journey towards the creation of a renewable footprint in Russia. We are looking forward to producing energy with both our Russian wind farms, and we will continue scouting for new opportunities in this renewables-rich country. Moving ahead, we plan to further leverage on this wealth of resources and keep on fuelling Russia’s economy through an increasingly diversified generation mix,” commented Antonio Cammisecra, Global Head of Enel Green Power.

Enel Russia invested approximately 132 million euros in the Azov wind farm which is expected to enter into service by the end of 2020. The wind farm will be able to generate around 320 GWh of clean energy each year, preventing the annual emission of around 260,000 tonnes of CO2 into the atmosphere. The Azov wind farm will consist of 26 turbines spread across 133 hectares.

The Azov wind farm and the 201 MW Murmansk wind farm with total capacity of 291 MW was awarded to Enel Russia in the 2017 Russian government tender for the construction of 1.9 GW of wind capacity in the country. Enel Green Power is in charge of the development and construction of both projects. Approximately 405 million euros was invested by Enel Russia for the two facilities, with the investment on the 201 MW wind farm amounting to around 273 million euros.

Enel Russia is a power generation company that operates four thermal power plants in the Russian Federation with a total installed capacity of around 9.5 GW. Enel Russia is controlled by Enel.

Enel Green Power is a global leader in the green energy sector. It has a managed capacity of more than 43 GW across a generation mix that includes wind, solar, geothermal and hydropower and is at the forefront of integrating innovative technologies into renewable power plants. Enel Green Power is the global business line of the Enel Group. The company is dedicated to the development and operation of renewables across the world. It has presence in Europe, the Americas, Asia, Africa and Oceania.