Holzminden, Germany, 6-5-2014 — /EuropaWire/ — Symrise AG had a successful start into the fiscal year 2014. The Group benefited from persistent high demand in both divisions and increased sales to € 470 million in the first quarter (Q1 2013: € 458 million). Adjusted for currency translation effects, sales recorded an increase by 8 %. At the same time, Symrise boosted its earnings before interest, taxes, depreciation and amortization (EBITDA) by 9 % to € 101 million (Q1 2013: € 93 mil-lion) and achieved an EBITDA margin of 21.5 % compared to 20.3 % in the same quarter of the previous year. Net income for the period increased significantly by 13 % to about € 52 million. In April, Symrise moreover announced the planned acquisition of the French Diana Group. With this transaction, which is scheduled to be completed in the third quarter, the Company is reaching an important milestone in the implementation of its growth strategy.

Dr. Heinz-Jürgen Bertram, CEO of Symrise AG, said: “In the first quarter, Symrise seamlessly continued its strong performance from the preceding fiscal year. Demand from our customers remained at a high level. With the solid utilization of our capacities and an advantageous product mix, we achieved an excellent EBITDA margin. We also pursued our growth strategy at full speed and are taking a large step forward with the recently announced acquisition of the Diana Group. Within this context, we are expanding our market position, supplementing our portfolio of natural ingredients and are entering the highly profitable Pet Food market. We will also substantially expand our backward integration and secure our longterm access to important agricultural raw materials.”

Sales Increase by 8 % at Local Currency

In the first quarter, Symrise increased sales in the reporting currency by 2.6 % to € 469.6 million. At local currency, sales rose by 7.9 %. In addition to good capacity utilization in both divisions, the Group benefited from considerable growth in the Emerging Markets.

Cash flow from operating activities significantly grew and increased to € 49.4 million (Q1 2013: € 26.4 million); it particularly reflects the strong earnings performance and low inventories from the first quarter. The ratio of net debt incl. provisions for pensions to EBITDA amounted to 2.0 (Q1 2013: 2.0).

Sales in Emerging Markets Up By 12 %

Symrise again benefited from its strong presence in the Emerging Markets dur-ing the first quarter. Sales in these regions were up by 12 % at local currency. The share of Group sales attributed to the Emerging Markets amounted to 48 % and was on the same level as the prior year.

Symrise grew sales in the Scent & Care division to € 255 million after € 245 million in the previous year. In local currency, this corresponds to an increase of 9 %.

Particularly strong impulses came from the business units Fragrances and Life Essentials, which both realized doubledigit growth rates. Due to the strong demand in menthol, the business unit Aroma Molecules continued to build on its strong currency adjusted sales level from the first quarter of 2013.

Flavor & Nutrition generated sales of € 215 million in the first quarter of 2014 (Q1 2013: € 213 million). This corresponds to an increase of 6 % at local cur-rency. Similar to Scent & Care, the Emerging Markets, Latin America in particular, made a significant contribution to this result.

On April 12, 2014, Symrise announced the planned acquisition of the French Diana Group, the number one in the worldwide market for pet food and a leading provider of natural flavors. With the planned acquisition, Symrise will sub-stantially expand its market position in the Flavor & Nutrition division, intensify the backward integration for agricultural raw materials and expand into the highly attractive pet food segment. The acquisition, valued at € 1.3 billion (enterprise value), will have a full positive effect on earnings starting in 2015. In the fiscal year 2013, Diana generated sales of about € 424 million and an EBITDA margin of roughly 21 %. According to French law, the transaction requires consultation with Diana’s employee representatives as well as approval from anti-trust authorities. The acquisition is scheduled to be finalized in the third quarter of 2014.

After an excellent first quarter, Symrise is confirming its outlook for the fiscal year 2014. The Group expects to see further on solid demand and positive market developments in all regions and both divisions. Accordingly, Symrise is confirming its target to also outperform the global market for Fragrances and Flavors in 2014. Symrise furthermore aims at an EBITDA margin of more than 20 %. The targets defined for the 2020 fiscal year continue to apply to the expanded Symrise AG, including the addition of the Diana Group: Symrise aims at an annual sales growth (CAGR) of between 5 and 7 % and an EBITDA margin between 19 and 22 %.

Key figures of the group 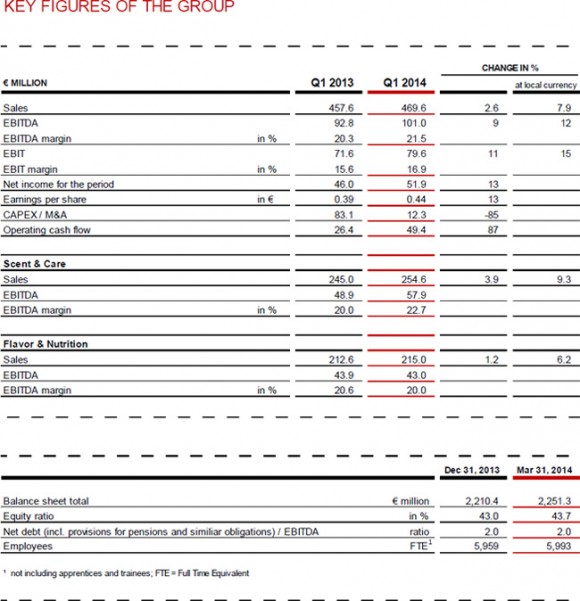 Symrise is a global supplier of fragrances, flavorings, cosmetic active ingredients and raw materials as well as functional ingredients. Its clients include manufacturers of perfumes, cosmetics, food and beverages, the pharmaceutical industry and producers of nutritional supplements.

Its sales of more than € 1.8 billion in 2013 place Symrise among the top four companies in the global flavors and fragrances market. Headquartered in Holzminden, Germany, the Group is represented in over 35 countries in Europe, Africa, the Middle East, Asia, the United States and Latin America.

Symrise works with its clients to develop new ideas and market-ready concepts for products that form an indispensable part of everyday life. Economic success and corporate responsibility are inextricably linked as part of this process. Symrise thus takes sustainability into account in every part of its corporate strategy. The company was awarded the German Sustainability Award in 2012. In 2013, Symrise was certified as a “Green Company” by DQS.