BERLIN, 06-Jun-2016 — /EuropaWire/ — Airbus Defence and Space, the world’s second largest space company, and the European Space Agency (ESA), agreed today to start a joint pilot project phase to prepare the operation and utilization of a new external payload platform on the European International Space Station (ISS) laboratory Columbus. ESA and Airbus Defence and Space signed the corresponding Memorandum of Understanding on June 2, 2016 at the ILA Airshow in Berlin (Germany).

The Bartolomeo platform is envisioned to be embedded into an end-to-end service designed to provide fast, cost-efficient and reliable access to the ISS for private and institutional users on commercial terms. The Bartolomeo all-in-one payload mission service is aimed at customers from areas including Earth observation, technology demonstrators, astro- and heliophysics, material science and new space flight applications.

“With Bartolomeo, we will provide a sustained commercial external payload hosting service on the ISS”, said François Auque, Head of Space Systems. “With this infrastructure, we intend to enlarge the user community, and offer them a broader range of solutions that meet their needs and that can be deployed rapidly.”

This new space facility, named “Bartolomeo” after the younger brother of Christopher Columbus, will be attached to the outside of the European “Columbus” laboratory module in 2018, providing access to power and data resources for customer payloads.

With almost 20 years of experience in the field of unpressurized cargo transportation and operation, this initiative strengthens Airbus Defence and Space’s position as a provider of human spaceflight-related system solutions and end-to-end payload operation services.

About Airbus Defence and Space
Airbus Defence and Space, a division of Airbus Group, is Europe’s number one defence and space enterprise and the second largest space business worldwide. Its activities include space, military aircraft and related systems and services. It employs more than 38,000 people and in 2015 generated revenues of over 13 billion Euros. 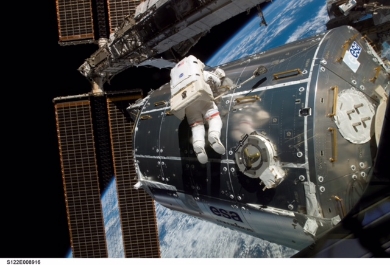