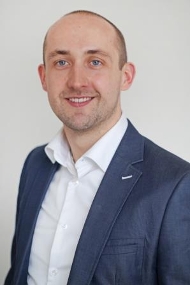 The Hague, The Netherlands, 18-Oct-2017 — /EuropaWire/ — The Dick Stufkens Prize 2017 for the best PhD thesis of the Holland Research School of Molecular Chemistry (HRSMC) is awarded to Dr Sven H.C. Askes. In his thesis ‘Upconverting Nanovesicles for the Activation of Ruthenium Anti-Cancer Prodrugs with Red Light’, Askes describes a clever combination of materials and techniques for a new approach in photochemical cancer therapy.

In the development of successful and safe cancer treatments the focus increasingly is on the selective and localized administration of anti-cancer drugs. The research of Sven Askes has opened a new path towards such administration using a new concept of photochemical cancer therapy. The basic idea here is to use relatively harmless compounds that can be brought safely into the patient’s blood stream without harmful side effects. At the site of the tumour these so-called prodrugs are subsequently converted into powerful anti-cancer drugs through irradiation with light.

In his research Sven Askes focussed on new prodrugs of the ruthenium-polypyridyl type. After activation with light these are able to induce cell death through a variety of bioselective mechanisms. In contrast to the well-known photodynamic therapy (PDT), which generates rather nonselective reactive oxygen species, ruthenium-polypyridyl prodrugs do not require the presence of oxygen. They can thus be used for the treatment of oxygen poor tumours not affected by PDT.

The activation of ruthenium-polypyridyl prodrugs, however, requires the use of blue light. This poses a serious limitation since blue light does not penetrate very deeply in living tissue. The solution sought by Sven Askes was to irradiate with red light – known to penetrate quite well – and to convert the red light into blue light at the tumour location.

To realise this ‘upconversion’ of light he employed the interplay of functional dye molecules capable of so-called ‘triplet-triplet annihilation (TTUC)’. Askes successfully devised nano sized supramolecular constructs (using liposomes and polymersomes) combining the upconverting dye molecules and the prodrugs to make sure the blue light indeed activates the prodrugs. Even so the omnipresence of oxygen turned out to seriously interfere with the upconversion efficiency. This problem was solved using biocompatible antioxidants such as ascorbic acid (vitamin C).

According to the jury of the Dick Stufkens Prize 2017 Sven Askes has with intelligence and perseverance overcome many of the hurdles hampering the development of the new photochemotherapy approach. In doing so he has mastered and applied a wide variety of chemical, spectroscopic, microscopic and biochemical techniques and produced an impressive number of publications in high-ranked journals that also document his extensive collaborations with other researchers.

The jury is impressed by the quality, the originality and the interdisciplinary character of Sven Askes’s PhD thesis and expects that the work will have considerable impact on future development of photochemical cancer therapy.