15-5-2013 — /europawire.eu/ — After more than five successful years in Russia, Arla has purchased the last 25 pct. of the joint venture that controls its Russian activities. The former owner, Mike Lyasko, will continue to head Arla’s activities in the Russian market.

The acquisition makes the Russian company a wholly-owned Arla subsidiary. Russia is one of Arla’s three strategic growth markets, and will be delivering a significant share of the company’s growth up to 2017. The goal is a threefold increase in revenue from today’s level of approximately DKK 600 million.

“The acquisition of the last 25 pct. cements our ambitions in Russia. Under the agreement from 2007, we have always had the option to acquire the remaining holding, and in view of our success in the Russian market, and our ambitions in our Strategy 2017, both parties considered this to be the right time,” says Hans Christensen, Senior Vice President in Consumer International with responsibility for Russia and North America.

150 colleagues
Artis was a distribution company, headquartered in St. Petersburg, when Arla acquired a 75 pct. stake in 2007, after a few years of collaboration. The name was changed to Arla Foods Artis and the owner, Mike Lyasko, continued as co-owner and head of the team. Since then, the company has expanded into a full business, with 150 colleagues, mainly in sales and marketing, another sales office in Moscow, and this year also local yellow cheese production in Kalacheevsky, southwestern Russia.

“Both volume and revenue have increased by an annual average of more than 20 pct. over the last five years. Mike’s entrepreneurial spirit and extensive knowledge of the retail sector have been key to our success, and I am pleased that he has chosen to continue to be part of Arla. We have to increase our business threefold, and this means that we must actively and constantly seek out new customers, to expand our scope in the world’s largest country,” says Hans Christensen.

Arla in Russia
• Arla’s consumer product strategy in Russia is to build strong market positions for high-quality products within the butter and cheese categories, and to investigate opportunities to produce locally via partnerships or acquisitions.
• Arla supplies products directly to customers in 95 different towns. In each of Russia’s 13 largest cities, all with more than one million inhabitants, Arla has its own sales representative.
• The products sold in Russia are Lurpak®, Castello®, cooking products under the Arla Apetina® brand and cream cheeses under the Arla Natura® brand, which in future will also be the brand name on locally produced yellow cheeses.
• Arla is a market leader for white cheese, with a market share of 22 per cent, and aims to be one of the leading dairy companies for yellow cheese in Russia. 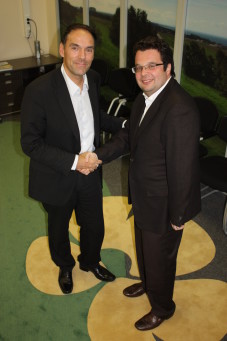