Airbus gives customers more comfort, range and efficiency with the launch of two new aircraft, the ACJ319neo and ACJ320neo

TOULOUSE, 21-5-2015 — /EuropaWire/ — Launching two new aircraft, the ACJ319neo and ACJ320neo, gives Airbus the ability to offer customers a corporate jet solution with more comfort, range and efficiency. They build on the widest and tallest cabin that is already the cornerstone of the family’s success around the world.

Both aircraft capitalise on new engines now being developed for the modern A320 airliner family, as well as Sharklets and improvements in cabin comfort and fuel capacity.

The more modern design of the A320 Family, which was conceived in the 1980s and has been continuously improved, enables it to better incorporate new technologies than older designs.

Airbus pioneered the use of new engines and Sharklets, which, in addition to increasing range,  deliver a 16 per cent improvement in fuel efficiency on the ACJ320neo, compared with today’s ACJ320ceo. Sharklets also reduce noise and emissions.

Airbus has already won around 3,800 orders for the A320neo Family which, together with today’s A320 Family, has now booked an impressive 11,600-plus orders.

Flight trials of the A320neo are already under way, with deliveries to airlines due to begin towards the end of this year, so the future is already flying.

Most of the efficiency improvement of a new aircraft comes from its engines.

Early jetliners of the 1950s and 1960s, were powered by small-diameter turbojet engines, in which all of the air entering passed through the hot core, before being ejected out of the back.

More modern jetliners of the 1970s and 1980s are powered by larger diameter, turbofan, engines, which bypass much of their airflow around the hot core.

Turbofan engines are inherently more efficient, because they generate thrust by ejecting a larger mass of air more slowly than smaller ones, throwing away less energy in their exhaust.

Today, the trend is toward even larger diameter turbofan-engines, for even greater efficiency.

Airbus offers CFM International LEAP-1A or Pratt & Whitney’s PW1100G engines on the ACJneo Family. Both have larger diameters than those on the competing aircraft, whose 1960s origins, when engines had small diameters, limits the size of what will fit beneath its wing today.

Surfaces at the wingtips, such as Sharklets, limit this airflow around the wingtips. This saves fuel by reducing drag, while also improving take-off and landing performance.

Sharklets are already in widespread service on airliner versions of the A320 Family. They are also flying on the Airbus ACJ320 Family, on which they are both new-build and retrofit options.

Sharklets are standard fit on the ACJneo Family, improving appearance as well as extending range, reducing fuel-burn, and improving performance.

Civil aircraft typically fly at heights of 30-40,000ft, where thinner air makes breathing difficult. Their cabins are thus pumped up with air as they climb, to provide a breathable atmosphere for passengers (typically the equivalent of about 8,000ft, though this varies from aircraft to aircraft).

A lower cabin altitude makes most sense on long flights, especially towards their end, when an aircraft is able to reach its highest cruising altitude. This because aircraft are laden with fuel at the start of such flights, only being able to climb higher after consuming much of their fuel.

Airbus’ ACJneo Family will feature a lower cabin altitude (LCA), equivalent to an average of less than 6,400ft, delivering an atmosphere that is even closer to that experienced on the ground.

The Airbus ACJ319neo is offered with up to five ACTs in its cargo-hold, allowing space for baggage underfloor – as well as on board. This matches the five ACTs that some of today’s ACJ319 operators currently utilise.

The ACJ320neo is now offered with up to four additional centre tanks (ACTs) in its cargo-hold – two more than previously offered. The disposition of the ACTs in the cargo-hold is also improved, allowing up to 18.4m3/650ft3 of baggage to be carried when all four ACTs are fitted.

Contacts for the media: 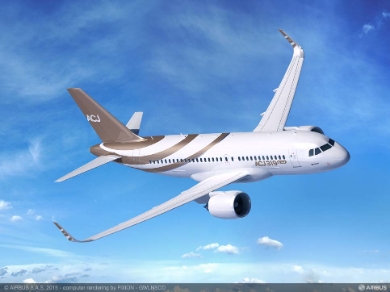