Shell’s Projects & Technology Director Matthias Bichsel commented:  “We are cutting 7.6 tonnes of steel for the Prelude floating liquefied natural gas facility today, but in total, more than 260,000 tonnes of steel will be fabricated and assembled for the facility.  That’s around five times the amount of steel used to build the Sydney Harbour Bridge.  Today’s ceremony marks a major milestone in this project, when the innovative thinking and new technology and engineering solutions which will make FLNG possible begin to be realised.”

When completed, the Prelude FLNG facility will be 488 metres long and 74 metres wide, making it the largest offshore floating facility ever built.  When fully equipped and with its cargo tanks full, it will weigh more than 600,000 tonnes.  There will be over 3,000 kilometres of electrical and instrumentation cables on the FLNG facility, the distance from Barcelona to Moscow.

“Making FLNG a reality is no simple feat,” Matthias continued.  “Shell is uniquely positioned to make it a success given our commercial capability; our LNG, offshore, deepwater and marine technology; and our proven ability to successfully deliver megaprojects.”

In order to meet the world’s growing energy demand, bringing new supplies to market is critical. The Prelude FLNG facility will be deployed in Australian waters over 200 kilometres from the nearest point on the coast.  It will produce gas at sea, turn it into liquefied natural gas and then transfer it directly to the ships that will transport it to customers.

An expert team from Shell will manage the multi-year construction of the FLNG facility to ensure the Prelude project’s critical dimensions of safety, quality, cost and schedule are delivered.  Strategic partners Technip and Samsung Heavy Industries (the Technip Samsung Consortium) along with SBM and hundreds of suppliers and contractors around the world are all contributing valuable knowledge, skills and equipment to help make the project a success.  At peak levels, around 5,000 people will be working on the construction of the FLNG facility in South Korea; and another 1,000 will build the turret mooring system, subsea and wells equipment in other locations across the globe.

In the lead up to the facility being ready to start production, a number of actions will take place, such as drilling the production wells, installation of subsea flowlines and risers and mooring chains to prepare for the arrival of the FLNG facility.

Prelude FLNG is the latest in a line of Shell achievements in developing new technologies for the oil and gas industry, reinforcing its leadership in technology and innovation.  This is the first of what Shell expects to be multiple Shell FLNG projects.

In 2012, Australian subsidiaries of INPEX Corporation (17.5%) and Korea Gas Corporation (10%) joined the Prelude FLNG project.  An Australian subsidiary of CPC Corporation (5%) has also signed an agreement to do so.  Completion of this transaction remains subject to conditions including Taiwanese government approval. By taking a stake in the project, INPEX, KOGAS and CPC show the confidence they place in Shell’s FLNG technology.

FLNG will enable the development of gas resources ranging from clusters of smaller more remote fields to potentially larger fields via multiple facilities where, for a range of reasons, an onshore development is not viable. This can mean faster, cheaper, more flexible development and deployment strategies for resources that were previously uneconomic, or constrained by technical or other risks.

Many of the technologies used on the FLNG facility are ones that Shell has used successfully onshore, but some have been extended or modified for offshore.  The new technologies that Shell developed for FLNG include:  managing sloshing in LNG tanks; systems for managing the close coupling between the producing wells and the LNG processing facility; LNG offloading arms; water intake risers;  mooring systems; and the marinisation of processing equipment such as absorption columns and the main cryogenic heat exchangers.  All of these technologies have been extensively modelled and tested to ensure they can operate safely and efficiently under marine conditions.

Shell’s innovation in FLNG has been recognised by the industry including:

The companies in which Royal Dutch Shell plc directly and indirectly owns investments are separate entities. In this press release “Shell”, “Shell group” and “Royal Dutch Shell” are sometimes used for convenience where references are made to Royal Dutch Shell plc and its subsidiaries in general. Likewise, the words “we”, “us” and “our” are also used to refer to subsidiaries in general or to those who work for them. These expressions are also used where no useful purpose is served by identifying the particular company or companies. ‘‘Subsidiaries’’, “Shell subsidiaries” and “Shell companies” as used in this press release refer to companies in which Royal Dutch Shell either directly or indirectly has control, by having either a majority of the voting rights or the right to exercise a controlling influence. The companies in which Shell has significant influence but not control are referred to as “associated companies” or “associates” and companies in which Shell has joint control are referred to as “jointly controlled entities”. In this press release, associates and jointly controlled entities are also referred to as “equity-accounted investments”. The term “Shell interest” is used for convenience to indicate the direct and/or indirect (for example, through our 24% shareholding in Woodside Petroleum Ltd.) ownership interest held by Shell in a venture, partnership or company, after exclusion of all third-party interest.

The United States Securities and Exchange Commission (SEC) permits oil and gas companies, in their filings with the SEC, to disclose only proved reserves that a company has demonstrated by actual production or conclusive formation tests to be economically and legally producible under existing economic and operating conditions.  We may have used certain terms in this press release that SEC’s guidelines strictly prohibit us from including in filings with the SEC.  U.S. Investors are urged to consider closely the disclosure in our Form 20-F, File No 1-32575, available on the SEC website www.sec.gov. You can also obtain these forms from the SEC by calling 1-800-SEC-0330. 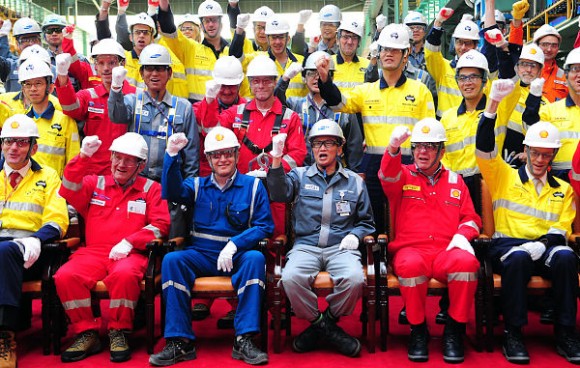