When colour came to Britain

12-11-2012 — /europawire.eu/ — Professor Sarah Street of the Department of Drama: Theatre, Film, Television will give a talk on her new book Colour Films in Britain: The Negotiation of Innovation, 1900-55 at the BFI Southbank on Monday [12 November] .

The event, part of the King’s @ BFI: Key Scholars in Film Studies seminar series run by King’s College, London, begins at 6pm; tickets are available from the BFI website.

In her talk, Professor Street will reveal how colour was a controversial topic for British cinema, greeted by some as an exciting development with scope for developing a uniquely British aesthetic, while other feared its impact on audiences accustomed to seeing black-and-white films that were frequently praised as being superior.

Professor Street’s Colour Films in Britain: The Negotiation of Innovation, 1900-55 (recently published by British Film Institute/Palgrave Macmillan) is the first study to trace the history of colour films, their styles and technologies in Britain during a half-century when colour films were far from the norm.

The book demonstrates how many British inventors and filmmakers were captivated by the possibilities created by colour, exploiting different processes and producing films that demonstrated remarkable experimentation and quality.

British technicians were responsible for producing some remarkable colour films, often enriching approaches to colour developed by dominant companies such as Technicolor, as well as creating their own innovative methods and styles which continue to influence cinema today.  The book demonstrates how technologies such as Kinemacolor, Prizmacolor, Dufaycolor and Technicolor were devised and received in the light of British colour tastes and iconographic traditions.

Colour Films in Britain is beautifully illustrated by stills from many important short and feature films and with detailed textual analyses of celebrated and lesser known films including The Open Road, This Is Colour, Blithe Spirit, The Life and Death of Colonel Blimp, The Red Shoes, The Tales of Hoffmann, The Ladykillers and Moulin Rouge.   It also includes a listing of colour films released in Britain between 1938 and 1955, and a Technical Appendix by Simon Brown of Kingston University, providing further details of the large number of colour processes referenced in the book.

Colour Films in Britain is an outcome from an Arts and Humanities Research Council-funded project that ran from 2007 to 2010.  Two further books are forthcoming: Colour and the Moving Image: History, Theory, Aesthetics, Archive, which brings together contributions from a number of scholars who attended an international conference on colour film held in Bristol in 2009, andBritish Colour Cinema: Practices and Theories, a series of interviews with key British technicians, archivists and film restorers.

Sarah Street is Professor of Film at the University of Bristol.  Her major areas of research are British cinema history; the politics and economics of the contemporary film industry; British film genres; aspects of costume and cinema, including work on Hitchcock, mise-en-scène, set design and colour film.  She has published extensively on British Cinema and other subjects, and is currently working on a collaborative project on ‘Colour in the 1920s: Cinema and its Intermedial Contexts’. 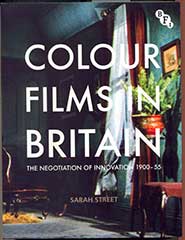 Professor Street’s latest book is the first study to trace the history of colour films, their styles and technologies in Britain during a half-century when colour films were far from the norm