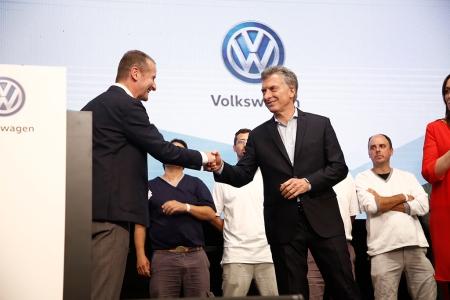 Pacheco, Argentina / Wolfsburg, Germany, 13-Nov-2017 — /EuropaWire/ — Volkswagen is investing some €560 million over the next five years in the production of a new SUV in Pacheco, Argentina. From 2020, the plant will deliver the new model built in Argentina to the entire South American continent. The new vehicle project will create some 2,500 jobs. Volkswagen is thus bringing further momentum to its South America strategy.

“We are laying the foundations for the brand’s growth on international markets with Volkswagen’s Transform 2025+ strategy. South America and Argentina play an important role in this regard. Key elements of the growth strategy are the biggest model offensive in the history of the brand and the systematic regionalization of our business. We will be underpinning our positioning at the top of the volume segments and winning further market share with new models from Volkswagen tailored to the wishes of customers in the markets”, Dr. Herbert Diess, CEO of the Volkswagen brand, said during a meeting with the President of Argentina, Mauricio Macri, and the CEO of the Volkswagen South America Region, Pablo Di Si, in Pacheco.

Under its Transform 2025+ future strategy, Volkswagen is taking measures to successfully realign business on world markets. The brand is increasingly delegating responsibilities previously controlled centrally from Wolfsburg to the regions. Going forward, the regions will hold full responsibility for the entire scope of business activities – right through to decisions relating to the model range. In addition to South America, responsibilities have also been delegated to the regions of North America, China and the Sub-Saharan area of Africa.

The new vehicle project in Argentina is a further milestone in what is to date the Volkswagen brand’s largest product offensive in the South America region. The design, size and equipment of the SUV planned for 2020 and based on MQB technology are targeted to appeal to a broad customer base on the South American continent – and thus bring further momentum to the brand’s South America strategy.

“Volkswagen believes in the great potential of the South American continent. The investments create the optimal conditions for the efficient production of our new SUV – built in Argentina for the markets in South America”, Volkswagen South America’s CEO Di Si said.

The modernization measures under the investment plans will optimize the manufacturing process and thus enhance both quality and sustainability in production. This is the ideal preparation for start of production at the Pacheco plant in 2020.

Volkswagen has launched the largest product offensive in its history in South America: 20 new models based on the Modular Transverse Toolkit (MQB), including a totally revamped pickup range and further locally-built SUVs, will be launched in the region by 2020. The localized variant of the MQB will therefore play a decisive role in enhancing the Volkswagen brand in South America with new, attractive vehicles for the region. Assuming a positive overall market trend, the company expects to move back into the black in South America by 2020. Currently, there is a significant increase in deliveries in the region. Some 36,000 vehicles were handed over to customers from January to October – that represents an increase of more than 60 percent compared with the same period last year. Key drivers behind this positive development are Brazil and Argentina. Growth in the small car segment, which includes the Gol and Voyage, in these markets is particularly strong.