Viable and fertile fruit flies in the absence of histone H3.3

19-11-2012 — /europawire.eu/ — Histones – proteins that package DNA – affect cell function differently than previously assumed: the cell doesn’t need the histone H3.3 to read genes. Molecular biologists from the University of Zurich demonstrate that fruit flies can develop and reproduce in the absence of this histone. Additionally, cell division works without a histone modification previously deemed crucial.

Histones are proteins that are found in the cell’s nucleus, where they are present in complexes with DNA and are presumed to play a regulatory role in all processes that take place on the DNA. These processes include transcription, namely RNA synthesis, and the duplication of DNA during cell division. Until now, the function of the individual histones in the various processes could only be determined indirectly. Molecular biologists Konrad Basler and Martina Hödl from the University of Zurich for the first time directly studied the function of two histones and one histone modification – with surprising results: Viable and fertile organisms develop in the absence of the histone known as H3.3. Additionally a particular histone modification was believed to be crucial for the activation of gene transcription. However, the researchers were able to demonstrate that this is also not the case. The established models for the role and function of histones and their modifications during the transcription and cell-division need to be revised.

For their study, Basler and his postdoctoral student Hödl used the fruit fly Drosophila melanogaster, the genome of which has been fully decoded. In an initial experiment, the scientists switched the two histone variants H3.2 and H3.3 in the cells. In normal (i.e. non-manipulated) cells, histone H3.2 is only expressed in one specific phase of the cell cycle, the so-called S phase. Histone H3.3, however, is always expressed. Consequently, it was assumed that histone H3.3 plays a key role in transcription, especially in reading genes. Thus, the general consensus was that RNA synthesis would be restricted in the absence of histone H3.3. “In our experiment, under lab conditions viable and fertile fruit flies could develop from cells that do not have any H3.3,” explains Hödl, summing up the result that turns the previous understanding on its head. “Organisms also begin to develop from cells without H3.2 but these died in the first larval stage,” Hödl continues.

Genes are switched on and off without histone modification

Histones are modified by different enzymes at different points in the protein. In a second experiment, Basler and Hödl examined the importance of modifications of the fourth amino acid of the protein, a lysine. Modification of this lysine is thought to play a key role in activating and deactivating the transcription of the gene. To test this, the scientists replaced the lysine with non-modifiable amino acids in all the histone H3 genes. The result was another big surprise. “Cells without this specific histone modification are able to divide normally,” explains Basler before adding: “However, they do so considerably more slowly than cells that have not been modified.” Therefore, the modification of this lysine is not essential for the activation of the genes.

The results show that the activation of genes and the inheritance of the ability to activate genes work differently than previously assumed. Clearly, the structure of the transcription process is extremely robust. According to Basler, the role of this common histone modification for cell function has been overestimated in recent years. 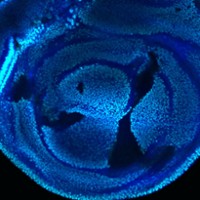 Drosophila wing imaginal disc: Non-stained cells, areas in black, can not modify their histone H3 at the lysin. But the cells can divide and read genes. Dark blue represents non-mutant cells, cyan represents the modification at the lysin. (picture: UZH)