University of Bristol: New analyses shed light on the diets of Jurassic mammals

New analyses of tiny fossil mammals from South Wales are shedding light on the function and diets of our earliest ancestors, a team led by researchers from the Universities of Bristol and Leicester report today in the journal Nature.

BRISTOL, 22-8-2014 — /EuropaWire/ — For most people, mere mention of the word Jurassic conjures up images of huge dinosaurs chomping their way through lush vegetation – and each other.  However, mammals and their immediate ancestors were also around in the Jurassic period (201-145million years ago), albeit as rather less spectacular creatures.

These shrew-sized, early Jurassic mammals were thought to have been confined to the ecological margins, eating whatever insects they could find.  However, this was also the time when new mammal characteristics – such as better hearing and teeth capable of precise chewing – were developing.  So, if the earliest mammals were all small generalized insectivores, where was the competition driving the evolution of such features?

To answer this question, the researchers studied fossils of these early mammals found in Glamorgan, South Wales which 200 million years ago consisted of a series of small islands in a shallow continental sea.  By analysing jaw mechanics and fossil teeth, the team were able to determine that two of the earliest mammals, Morganucodon and Kuehneotherium, were not generalized insectivores but had already evolved specialised diets, feeding on distinct types of insects.

Lead author, Dr Pamela Gill of the University of Bristol said: “None of the fossils of the earliest mammals have the sort of exceptional preservation that includes stomach contents to infer diet, so instead we used a range of new techniques which we applied to our fossil finds of broken jaws and isolated teeth.  Our results confirm that the diversification of mammalian species at the time was linked with differences in diet and ecology.”

The team used synchrotron X-rays and CT scanning to reveal in unprecedented detail the internal anatomy of these tiny jaws, which are only 2cm in length.  As the jaws are in many pieces, the scans were ‘stitched together’ to make a complete digital reconstruction.  Finite element modelling, the same technique used to design hip joints and bridges, was used to perform a computational analysis of the strength of the jaws.  This showed that Kuehneotherium and Morganucodon had very different abilities for catching and chewing prey.

Using an analysis previously carried out on the teeth of present-day, insect-eating bats, the researchers found that the teeth of Morganucodon and Kuehneotherium had very different patterns of microscopic pits and scratches, known as ‘microwear’.  This indicated they were eating different things with Morganucodon favouring harder, crunchier food items such as beetles while Kuehneotherium selected softer foods such as scorpion flies which were common at the time.

Professor Mark Purnell of the University of Leicester said: “This is the first time that tooth wear patterns have been used to analyse the diet of mammals this old.  That their tooth wear compares so closely to bats that specialise on different kinds of insects gives us really strong evidence that these early mammals were not generalists when it came to diet, but were quite definite in their food choices.”

Team leader, Professor Emily Rayfield from the University of Bristol added: “This study is important as it shows for the first time that the features that make us unique as mammals, such as having only one set of replacement teeth and a specialised jaw joint and hearing apparatus, were associated with the very earliest mammals beginning to specialise their teeth and jaws to eat different things.”

The research was funded by the Natural Environment Research Council, UK (NERC). 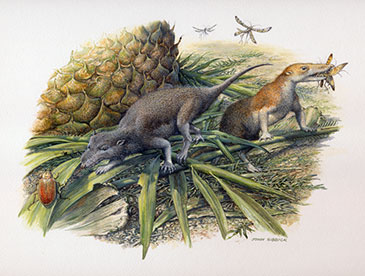 Universities of Bristol: New analyses shed light on the diets of Jurassic mammals