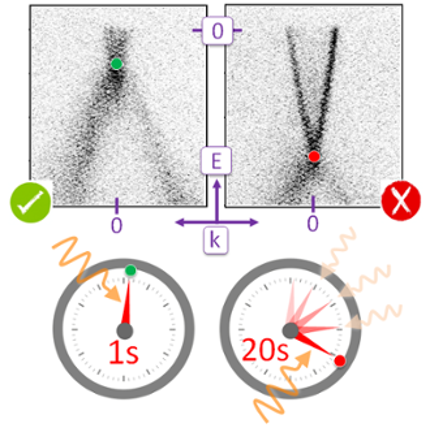 Image: The band structure of a topological insulator measured using photoemission. The dark areas indicate which energies [on the y-axis] go together with which (here inverse) wavelengths [on the x-axis] for the electron waves in the solid. After 20 seconds exposure to the UV light involved in doing a photoemission experiment (right-hand image) the band structure is very different to that after only 1 second exposure (left-hand image). The coloured circles show the position of the Dirac point. (Image from publication).

The Hague, 22-Nov-2017 — /EuropaWire/ — The Nobel Prize for physics in 2016 was awarded for the theory of topological matter. Topological insulators are new materials with special electronic properties and are of great fundamental and applications-oriented interest. Nevertheless, physicists have wrestled with a ten-year-old puzzle in which the results from the two best methods to probe their electronic states disagree. Researchers from Amsterdam, including two FOM-funded PhD candidates, with collaborators in France, Switzerland and Germany now know exactly why.

Topological insulators are strange stuff. The bulk of such a crystal is insulating and cannot carry an electrical current, yet the surfaces of that same crystal are conducting. These new materials are of great fundamental interest but are also very promising for a number of future applications in special types of electronics and in quantum computation, and so they are the subject of a substantial physics research effort. The significance of topological materials was underlined last year with the award of the Nobel Prize for the development of fundamental theories setting out the existence and behaviour of topological matter.

There are two powerful experimental methods to examine the behaviour of the electrons – the particles that carry electrical current – at the surface of a topological insulator. The first involves sending a current through the system in the presence of a very large magnetic field, and is known as magnetotransport. The second involves the use of an ultraviolet light beam to examine the surface of the crystal. In this case, the energy of a light particle can be absorbed by an electron and in this way those near the surface can escape the crystal and be analysed. Researchers can harness this photo-electric effect to gather valuable information on the electronic properties at the surface of a topological insulator, the place where all the action is. This kind of experiment is called photoemission.

Since more than 10 years, researchers have been baffled as to why these two experiments completely disagree when applied to topological insulators. Now researchers from Amsterdam, including two FOM-funded PhD candidates, together with collaborators in France, Switzerland and Germany recently caught a glimpse of the reasons why. The hypothesis? The very first UV light flash, required to record the photoemission data, itself alters the electronic structure at the surface.

The quantity that describes and explains how electrons in a solid do their stuff is called the band structure. It can be seen as a sort of road network, that maps out the allowed combinations of energy and wavelength the electron-waves can have in the crystal. A slice through such a band structure can be easily displayed as a 2D image like those in the images shown here. This kind of snapshot contains valuable information on the electronic structure of a topological insulator, and in particular the energy location of the crossing-point of the two branches visible in the band structure. This special feature – highlighted with a coloured marker in the images – is called the Dirac point, named for theoretical physicist Paul Dirac whose theory first described electrons like those at the surface of a topological insulator.

Normally, recording a band structure image costs a minute or more. But here the researchers worked hard to bring this down to just a single second, and the left-hand image was the result. The Dirac point (green circle) comes at an energy matching that from magnetotransport data. After only 20 seconds of UV exposure, the red marker in right-hand picture shows that the Dirac point, and the rest of the band structure with it has slid way down in energy, far from the value found in the transport experiments.

It was already known that molecules that stick to the surface of the topological insulator can cause a downward shift of the Dirac point. These new experiments were able to disentangle the effect of the molecules at the surface and that of the UV light, so the researchers could demonstrate that the very first flash of light in fact plays the role of the starter’s pistol, triggering a rapid downward slide of the Dirac point.

These new results are very useful, as photoemission is a very important experiment in the field of topological materials. But do they mean that photoemission is ripe for the rubbish bin? On the contrary! Now that the effect of the UV light is properly understood, protocols could be developed as to how photoemission can be used in the right way in future studies of topological insulators. The photoemission results and the guidelines for improved experimental procedures were published this week in the leading (open access) physics journal, Physical Review X.