23-10-2012 — /europawire.eu/ — Barclays PLC and Barclays Bank PLC (“Barclays”) announce that Tim Breedon has been appointed as a non-executive Director of Barclays with effect from 1 November 2012.

Mr Breedon served as Chairman of the Association of British Insurers (ABI) between July 2010 and July 2012, having been a director since 2007. He was also chairman of the UK Government’s non-bank lending taskforce, an industry-led taskforce that looked at the structural and behavioural barriers to the development of alternative debt markets in the UK, reporting its conclusions and recommendations in March 2012. His former directorships include the Investment Management Association and the Financial Reporting Council.

Commenting, Sir David Walker, Chairman designate said, “I am delighted that Barclays has secured the services of Tim Breedon as a non-executive Director. He brings extensive knowledge and experience of financial services, regulation and customer focus to the Barclays Boards.”

There is no other information required to be disclosed pursuant to paragraph LR9.6.13R of the Listing Rules of the Financial Services Authority.

Tim was appointed to the Board of Legal & General in January 2002 as Group Director (Investments) and became Group Chief Executive in January 2006. In June 2012 he stepped down as Group Chief Executive. He joined Legal & General in 1987 and former roles include Managing Director (Index Funds) and Director (Index Funds). Tim was a director of the Association of British Insurers and was Chairman between July 2010 and 2012. He has also been a director of the Investment Management Association and Financial Reporting Council.

Barclays is a major global financial services provider engaged in personal banking, credit cards, corporate and investment banking and wealth and investment management with an extensive international presence in Europe, the Americas, Africa and Asia.

With over 300 years of history and expertise in banking, Barclays operates in over 50 countries and employs approximately 140,000 people. Barclays moves, lends, invests and protects money for customers and clients worldwide.

For further information about Barclays, please visit our website www.barclays.com. 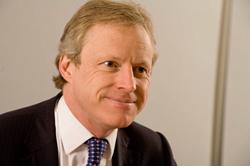