Stuttgart, 10-7-2013 — /europawire.eu/ — The Bosch Group has presented the Bosch Global Supplier Award to its best suppliers. In total, the technology and services company has honored 38 suppliers out of nine countries with awards in five categories. This is the thirteenth time that Bosch has given the Supplier Award to companies that have manufactured and supplied products or services particularly well. “The Bosch Global Supplier Award serves both as recognition and inspiration. In awarding it to our top suppliers, we aim to motivate all our other suppliers to perform just as well,” said Dr. Volkmar Denner, chairman of the Bosch board of management, during the award ceremony in Stuttgart.

Innovations drive competitiveness
The theme of this year’s presentation of the Bosch Global Supplier Award was “Innovation – drives competitiveness.” For the first time, there was an award in the new “innovation” category, which went to the Japanese company Shin-Etsu Chemicals Co., Ltd. for its development work on magnets. Bosch uses these in its ABS systems and motors, among other applications. Dr. Stefan Asenkerschbaumer, the Robert Bosch GmbH board of management member responsible for purchasing and logistics, said during the ceremony: “Innovative strength is a key prerequisite for keeping Bosch competitive,” adding that suppliers are important partners in this. Asenkerschbaumer also sees innovations as being of great benefit to suppliers: “Everyone stands to gain from innovations. In the competition to win orders from Bosch, new ideas and inventive approaches are more important than ever.” He went on to say that suppliers can use their innovations to open up new markets and new business opportunities for themselves.

Early integration to tap potential
In the future, Bosch wishes to integrate its suppliers in the product development process at an even earlier stage. “Our suppliers are an integral part of our innovation strategy. We need to harness their expertise and their creativity early on in the development process,” said Denner. It is at this early point that new ideas can have the biggest impact on subsequent manufacturing costs. “Whether a product is competitive is determined to a great extent during its development.”

Web platform for ideas
Bosch is working in joint projects with existing suppliers to develop new products and processes. The company is also always on the lookout for new inventions, and it has set up a central point of contact for this in the form of its own web platform for ideas. Companies and individuals can offer their inventions at www.bosch.com/idea – whether they are products, processes or procedures, and whether they already exist or are so far no more than an idea or a concept. Specialist associates evaluate the ideas that are submitted, and if suitable pass them on within Bosch to the area that can make best use of them.

Global sourcing – further internationalization of the supplier base
In 2012, the Bosch Group’s total purchasing volume came to some 27 billion euros. The focus is on Europe, with around 65 percent of the purchasing volume. Outside Europe, most Bosch purchases are made in China, the United States, and Japan. Bosch is looking to increase the share of its purchases made internationally, with the aim of sourcing its parts and services locally wherever they are needed. For the most part, purchases are made up of manufacturing materials such as electronic components, mechanical and electromechanical components, and plastic parts, but they also include merchandise, supplies, services, and machinery.

Please note: You can find a full list of award winners on the Bosch Media Service.

The Bosch Group is a leading global supplier of technology and services. In fiscal 2012, its roughly 306,000 associates generated sales of 52.5 billion euros. Since the beginning of 2013, its operations have been divided into four business sectors: Automotive Technology, Industrial Technology, Consumer Goods, and Energy and Building Technology. The Bosch Group comprises Robert Bosch GmbH and its roughly 360 subsidiaries and regional companies in some 50 countries. If its sales and service partners are included, then Bosch is represented in roughly 150 countries. This worldwide development, manufacturing, and sales network is the foundation for further growth. Bosch spent some 4.8 billion euros for research and development in 2012, and applied for nearly 4,800 patents worldwide. The Bosch Group’s products and services are designed to fascinate, and to improve the quality of life by providing solutions which are both innovative and beneficial. In this way, the company offers technology worldwide that is “Invented for life.” 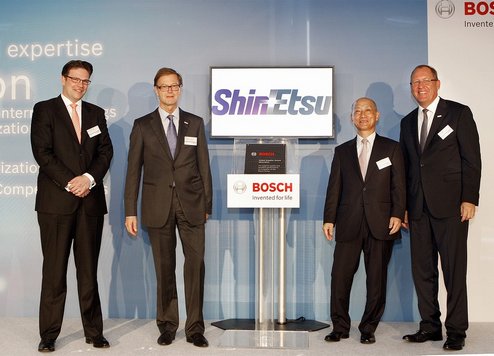 Bosch Global Supplier Award Bosch honors its best suppliers
The Bosch Group has presented the Bosch Global Supplier Award to its best suppliers. In total, the technology and services company has honored 38 suppliers out of nine countries with awards in five categories. The theme of the 2013 presentation of the Bosch Global Supplier Award was “Innovation – drives competitiveness.” For the first time, there was an award in the new “innovation” category, which went to the Japanese company Shin-Etsu Chemicals Co., Ltd. for its development work on magnets. Yukihiro Matsui, board member of Shin-Etsu Chemicals, and Kai Schmersahl, Key Account Europe, accepted the award from Dr. Stefan Asenkerschbaumer, the Robert Bosch GmbH board of management member responsible for purchasing and logistics, and Dr. Karl Nowak, President of the Corporate Sector Purchasing and Logistics.