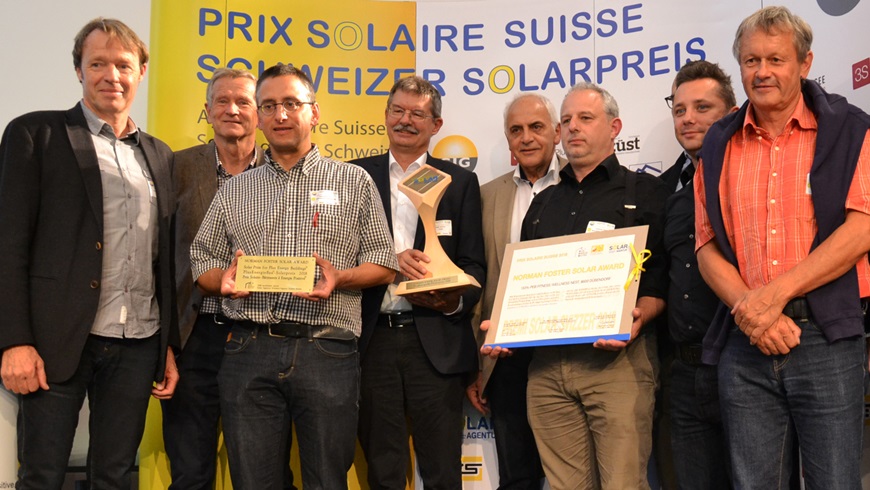 The winners of this years “Norman Foster Solar Awards”

At the 28th Swiss Solar Awards Ceremony on 16 October 2018, the NEST unit “Solar Fitness & Wellness” received one of the three coveted “Norman Foster Solar Awards”. The solar-powered fitness and wellness facility in the Empa and Eawag research and innovation building convinced the jury with its use of solar technology for a new and surprising application.

Dübendorf, Switzerland, 17-Oct-2018 — /EuropaWire/ — Since 1990, both buildings and personalities who contribute to the promotion of solar energy have been awarded the annual Swiss Solar Prize. This year, the “Norman Foster Solar Awards” were presented for the ninth time. The award, under the patronage of the British star architect Norman Foster, is aimed at buildings that “meet the highest architectural and aesthetic standards and are groundbreaking for building and solar architecture in the 21st century”, as the regulations state. The prize is awarded to buildings that show a positive energy balance over the course of the year and have the best-integrated solar systems.

This year’s jury honored the “Solar Fitness & Wellness” unit in the NEST research and innovation building with one of these prestigious awards. Peter Richner, Empa’s Deputy Director, and Peter Dransfeld, architect of the NEST unit, received the award at the ceremony in Sursee on 16 October in the presence of numerous celebrities from both Switzerland and abroad.

Innovative use of solar energy

The fitness and wellness facility at NEST went into operation in August 2017. The aim is to reduce the energy consumption of the system, which has two saunas and a steam bath, to such an extent that it can be operated with solar power produced directly on the façade and roof of the unit. An efficient CO2 high-temperature heat pump provides the heat for the wellness modules. Architecturally, the unit stands out due to three ellipsoids floating inside, which help to reduce the heat losses of the saunas. Although the NEST unit is not a completely separate building in the conventional sense, the jury found that the unit’s performance, but also its integration into an innovative structure, deserved a “Norman Foster Solar Award”. According to the jury, the fitness and wellness unit shows how solar technology can be applied to innovative uses.

Architect Peter Dransfeld and his team were delighted to receive three awards at the solar awards ceremony. He received a second “Norman Foster Solar Award” for the Kastanienhof school building in St. Margarethen, which produces more than twice as much energy as it consumes. For the renovation of a detached house in Bottighofen, the architect based in Ermatingen also received a so-called “PlusEnergieBau-Diplom”.