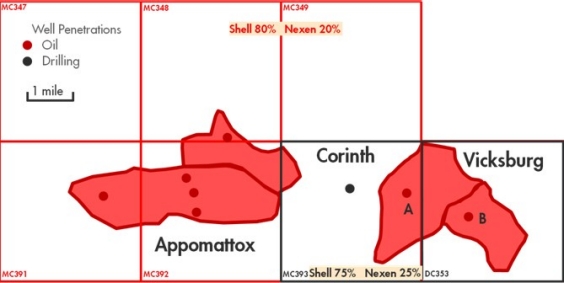 “The results of the Vicksburg well strengthen our existing deepwater Gulf of Mexico exploration portfolio and should contribute to the nearby Appomattox discovery,” said Mark Shuster, Executive Vice President Shell Upstream Americas Exploration.

Shell (the operator with a 75% interest) and Nexen, a wholly-owned subsidiary of CNOOC Limited, (25% interest), are following up the Vicksburg “A” well with a sidetrack well to test the Corinth prospect, a separate fault block from the Vicksburg discovery.  Further exploration drilling targeting tie-backs to Appomattox will follow.