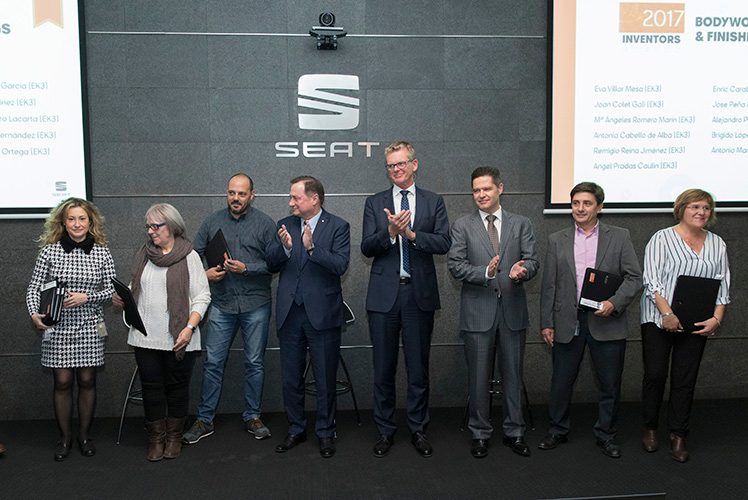 Martorell, Spain, 16-Nov-2017 — /EuropaWire/ — Promoting a culture of innovation among employees is the goal pursued by the SEAT Inventors Awards, which the company handed out last Friday to the creators of the patents registered in 2016 and to the best innovations of 2017. The awards ceremony  was attended, among others, by SEAT Vice-president for R&D Dr. Matthias Rabe; Vice-president for Human Resources Xavier Ros; Vice-president for Purchasing Klaus Ziegler; the Patent department head at Porsche Frank Zacharias, and senior patent expert from the patent office at Telefónica Toni López-Carrasco.

With the Inventors Awards, SEAT acknowledges on one hand the most outstanding initiatives that result in an innovation in products, services and manufacturing or development processes, and on the other, the inventors of the patents registered by the company. Throughout 2016, company employees created thousands of inventions, of which 38 were ultimately registered as patents, 28 national and 10 international. The company’s bodywork, trim and electrical development departments generated the highest number of patents. At this year’s edition of awards, there was a significant rise in the number of digitisation and HMI registrations. SEAT currently has 306 active patents. At the same time, in the framework of the company’s ideas for improvement programme, last year SEAT employees generated close to 14,000 ideas that contributed to a cost savings of nearly 14 million euros.

“Innovation is essential for a company such as SEAT, which aims leading the digital transformation, both in its products and processes. Innovation and know-how are largely generated by employee initiatives, who are constantly seeking new technological and organisational frontiers”, pointed out Dr. Matthias Rabe.

Digitisation in the spotlight

At this year’s edition of the SEAT Inventors Awards, which shed a powerful spotlight on digitisation and innovative Industry 4.0 processes, a prize was given in the following categories: Best Patent, which went to a simplified electronic system for the dynamic turning on and off of LEDs; Best Innovation in Production, an award to the “BiDrac” project, which studies how an industrial process can use the opportunities offered by Industry 4.0 to optimise monitoring of the process and facility maintenance, especially of the paint workshops; Best Idea for Improvement, which rewarded a driving robot that is able to control the car’s heading and speed in order to improve consistency during process development testing; and Best Innovation in Product and Service, which acknowledged how Alexa, the virtual assistant by Amazon, represents progress in the brand’s vehicles.

The Inventors Awards are proof of SEAT’s confidence in the capacity for innovation of its employees, and have become the hallmark for promoting an innovative culture among the company’s workers.

SEAT is the leading industrial investor in R&D in Spain. Investment in R&D exceeded 850 million euros in 2016, at a time when the company is undertaking the largest product offensive in its history.