With the approval, SimplyGo becomes the only FAA-cleared portable oxygen concentrator (POC) that offers user-triggered and continuous flow in a design of fewer than 5 kg (10 pounds). SimplyGo has twice the oxygen output of any other POC at this weight and is able to meet the portable needs of nearly all oxygen users. FAA approval applies to all SimplyGo systems, including those in use prior to the announcement.

“We are extremely pleased to inform oxygen users that they will be able to fly with the SimplyGo POC,” said Mats Dahlquist, Vice President Home Healthcare Solutions International. “Given its portability, oxygen output, and continuous flow capability, we believe that SimplyGo is an ideal choice for oxygen users who are active or like to travel.”

Although the FAA and other international aviation regulatory bodies allow the use of approved portable oxygen concentrators on commercial airlines, many domestic and international carriers have additional requirements including advance notification, and possession of a physician’s letter and oxygen prescription. Oxygen users planning to fly with SimplyGo should contact their airline well in advance of travel.

Royal Philips Electronics (NYSE: PHG, AEX: PHIA) is a diversified health and well-being company, focused on improving people’s lives through meaningful innovation in the areas of Healthcare, Consumer Lifestyle and Lighting. Headquartered in the Netherlands, Philips posted 2011 sales of EUR 22.6 billion and employs approximately 121,000 employees with sales and services in more than 100 countries. The company is a leader in cardiac care, acute care and home healthcare, energy efficient lighting solutions and new lighting applications, as well as male shaving and grooming, home and portable entertainment and oral healthcare. News from Philips is located at www.philips.com/newscenter. 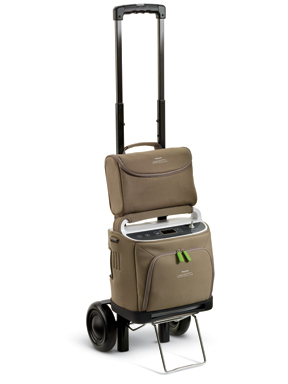