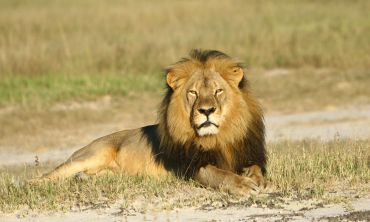 The first paper, published in the Journal of Applied Ecology, analysed the deaths of 206 lions in Hwange National Park, Zimbabwe – home of Cecil the lion – between 1999 and 2012. Researchers found that human activities caused 88% of male and 67% of female mortalities. Male deaths were dominated by trophy hunting, while the human sources of female mortality were more varied and included causes such as unintentional snaring by bushmeat hunters and retaliatory killing by herders for livestock loss.

Analysis showed that lions tended to avoid risky areas – such as farmland with high incidence of retaliatory killings – suggesting they may make behavioural decisions based on perceptions of risk. However, experienced adults visited risky areas less often than young individuals, suggesting that the latter may either be naive or forced into peripheral habitats by older lions.

The research highlights the risks that lions face – not only when they leave the protection of national parks and enter farmland or hunting areas, but also from poachers within protected areas themselves.

The second paper, published in the journal Biological Conservation, also used data from Hwange to show that intensive trophy hunting of male lions in the early 2000s had profoundly negative effects on the lion population. When trophy hunting management was improved, as a result of work by Oxford University’s Wildlife Conservation Research Unit (WildCRU), by vastly reducing hunting quotas in the mid-2000s, the lion population increased by 62% and the number of adult males in the population by 200%.

The study concludes that trophy hunting of territorial male lions causes a cascade of negative effects – including infanticide of cubs by new males – that greatly reduce survivorship across all demographic groups, potentially leading to population declines if hunting is not well managed.

Professor David Macdonald, a co-author of both papers and the founding Director of Oxford’s WildCRU, said: ‘Among the threats facing conservation is the global decline of many large apex predators. Public concern about the fate of many of these iconic species was strikingly emphasised by the outcry over the killing, by an American trophy hunter, of Cecil the lion – an animal studied closely by WildCRU.

‘These two important new pieces of research, based on long-term understanding of population dynamics, add very significantly to our understanding of the threats faced by lions and other large predators in a world that is increasingly dominated by the human enterprise.’

Dr Andrew Loveridge, also a member of WildCRU, and lead author on both papers, added: ‘Conservationists face real and increasingly costly challenges in protecting these important predator species. Solutions have to include increasing scrutiny of and improvement to the management of trophy hunting, working with farmers to limit loss of livestock to predators, and improving the security of protected areas against poaching and land conversion.’

‘Conservation of large predator populations: demographic and spatial responses of African lions to the intensity of trophy hunting’ is published in Biological Conservation: http://dx.doi.org/10.1016/j.biocon.2016.10.024

‘The landscape of anthropogenic mortality: how African lions respond to spatial variation in risk’ is published in the Journal of Applied Ecology: http://onlinelibrary.wiley.com/doi/10.1111/1365-2664.12794/abstract