New gateway to the world of Loewe TVs

Kronach, 26-10-2012 — /europawire.eu/ — The Loewe Xelos television line provides the perfect gateway to the world of Loewe TVs. Its design, picture quality, functionality and wide variety of set-up options are of the highest order. From October, in addition to Chrome Silver and Black, the Loewe Xelos in 32, 40 and 46-inch format will also be available in the fashion colours White and Mocha. Loewe Xelos, cuts a particularly classy figure on the Floor Stand Universal and brings together numerous functions which are necessary for perfect television enjoyment: 100Hz picture frequency for impressive sharpness of movement, LED backlighting for razor-sharp contrast, HDTV and DVB-T/C/S2 receiver for the reception of digital, high-definition programming via antenna, cable or satellite. All this is integrated into Loewe Xelos ex works. There is even an integrated CI+ interface for the reception of encoded channels.

In addition, the Loewe MediaPortal brings together all device functions in a clear and accessible format. LAN, Powerline or optional WLAN connection also provide access to select Internet content on the Loewe MediaNet, the ARD, ZDF and Arte media libraries via HbbTV, not to mention complete access to all content in the home network courtesy of MediaHome. The highlight of Loewe MediaNet for Loewe Xelos is the availability of YouTube – and access to countless online videos. Social media channels such as Facebook and Twitter are also integrated into the MediaNet.

It also goes without saying that other external hard drives can be connected to the Loewe Xelos via USB. Provided the content provider grants authorisation,USB recording means that the running programme can easily be recorded via all digital receivers and watched at a later point as an archived recording. Furthermore, the Loewe Xelos can also be connected to a Loewe TV network and thus functions as a client for DR+ Streaming. This way recordings that have been saved on the main television can be accessed and watched via the Loewe Xelos in secondary rooms – making Loewe Xelos the perfect secondary television.

A good picture should be accompanied by good sound: when it comes to audio playback Loewe Xelos stands out from the throng courtesy of integrated broadband speakers with 2 x 25 watts of musical power output for 40 and 46-inch models and 2 x 20 watts for the Loewe Xelos 32. It guarantees the perfect home cinema experience without the need for external loudspeakers. In conjunction with the Loewe Subwoofer Compact the Loewe Xelos provides powerful 2.1 sound. 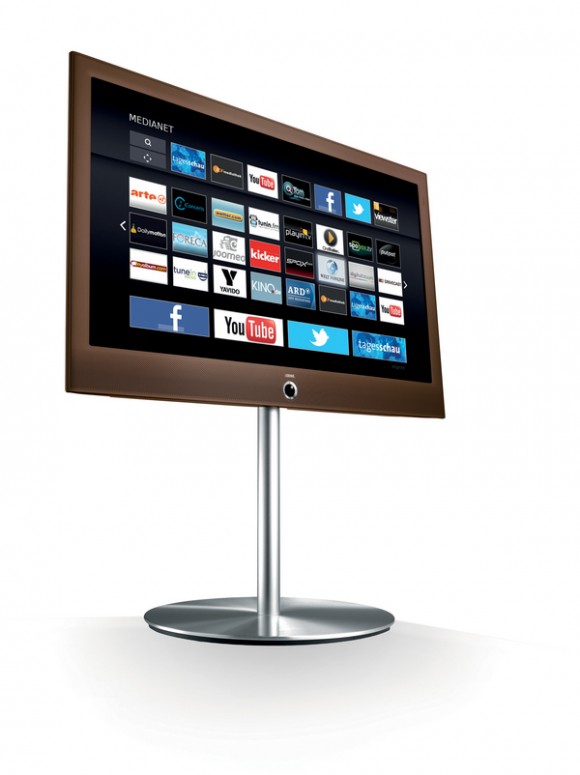