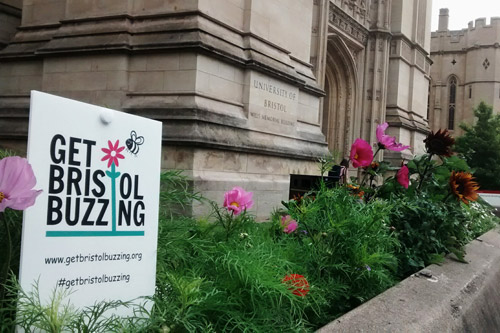 BRISTOL, 09-Mar-2017 — /EuropaWire/ — A report which outlines how local organisations have made life better for bees and pollinating insects in Bristol and the surrounding area over the last two years will be published tomorrow [March 7] to coincide with a meeting of the Bristol Green Capital Partnership at the SS Great Britain.

The Greater Bristol Pollinator Strategy’s report for 2015 and 2016 has been led by the University of Bristol and is a key element of the Get Bristol Buzzing initiative.

It outlines the fantastic progress and initiatives made across the local area in the last two years to raise awareness of the importance of the UK’s 1,500 species of pollinating insects and to protect and increase their environmental habitats.

First introduced in spring 2015 as part of Bristol’s year as European Green Capital, the Strategy, was the first of its kind in the UK and is a joint project between partners Avon Wildlife Trust, Bee Bristol, Bristol City Council, Bristol Friends of the Earth, Buglife, South Gloucestershire Council, the University of Bristol and the University of the West of England.

Dr Katherine Baldock from the University of Bristol’s Urban Pollinators Project and author of the new report said: “This unique collaboration of councils, environmental groups and universities working in partnership with community groups and individuals, has enabled action for pollinators across the entire city.

“Get Bristol Buzzing creates a joined-up approach between projects and organisations working to conserve pollinators.

“If everyone plays a part and creates a little bit of habitat for bees and other pollinating insects in their own gardens, allotments or window boxes we could really make a difference.”

The report outlines key highlights from the project which have taken place over the last two years.

This includes work by the University of Bristol which has created a new flower meadow at its city centre campus and a student-led project which has built planters, creating 30 square metres of pollinator haven in an area that was previously barren concrete.

Other examples include a transformed area of community garden at St Werburgh’s City Farm into a 30 square metres wildflower meadow which continues to ‘buzz’ with insects nearly three years later.

Other successes include a number of urban wildlife initiatives involving planting for pollinators which took place in 2015 and 2016 as part of the My Wild City project, supported through Green Capital funding.

The My Wild Cathedral initiative created pollinator habitat strips in the city centre outside Bristol Cathedral on College Green and scooped a Bees’ Needs award from Defra in 2016.

Across the city more widely, both Bristol City Council and South Gloucestershire Council have been improving public areas for pollinators. Meadow Bristol, a project launched by Bristol City Council in 2011, creates and maintains pollinator-friendly habitats across the Greater Bristol area and local wildlife sites have been improved through a number of partnership projects.

Anyone taking action for pollinators in Bristol is encouraged to add this information to the My Wild City Interactive Map to help the Steering Group monitor actions for pollinators across the city.

The development of the strategy has been supported by Defra, NERC and the University of Bristol’s Cabot Institute.

The report is available to read here.

About the Cabot Institute
The Cabot Institute drives world-leading research on how we depend on, live with and affect our planet.  It stimulates new thinking and strives for new innovations to meet our social and environmental challenges.   Its communities focus on six crucial areas: global environmental change, food, water, low carbon energy, natural hazards and future cities and communities.  Each community is driven by outstanding academics with government, industry and society partners from across the globe.  Working together, they seek radical and integrated solutions to 21st century challenges.