It is one of the most important awards for British businesses.  The official award notification to Jaguar Land Rover reads: “Her Majesty The Queen has been graciously pleased to approve the Prime Minister’s recommendation that your business should receive a Queen’s Award for Enterprise in International Trade, this year.”

Exports account for 80% of all vehicles Jaguar Land Rover produces at its three UK manufacturing plants.  In 2013, the company sold 425,006 vehicles, up 19% on the previous year. Jaguar Land Rover’s largest export regions are mainland Europe, North America and China, together accounting for 60% of all export sales.

In addition, the company’s share of vehicle sales in regions beyond its traditional major markets in the UK, US and Europe has increased from below 15% in 2008 to more than 40% now, as it has focused on driving a balanced global sales presence.

Dr. Ralf Speth, Jaguar Land Rover CEO, said of the Queen’s Award: “We are delighted and honoured to receive this recognition of Jaguar Land Rover’s contribution to British enterprise.  Our success is thanks to our dedicated and passionate employees who create exciting vehicles that are in high demand with customers around the world.

“The more we build our business, the more opportunity we can create to improve the lives of many families, by recruiting and training more people, investing in facilities andcommunities, and strengthening the overall growth of the UK economy.

“This Queen’s Award is the perfect complement to us being named Responsible Business of the Year 2013, in recognising our success internationally as well as the many positive ways we contribute to society.”

Jaguar Land Rover vehicles are all engineered and designed in Britain, with two research and development centres in addition to its three production facilities.  The company now employs almost 28,000 people directly in the UK, rising to almost 30,000 globally, with a further 190,000 UK jobs supported in dealerships, suppliers and local businesses.

Later this year, Jaguar Land Rover will open its first all-new engine manufacturing facility – located near Wolverhampton, UK – to produce a new family of advanced, aluminium engines, called “Ingenium”, that will power future Jaguar and Land Rover vehicles.  The centre, which was visited in February by Prime Minister, David Cameron, is the product of a £500m investment by the company and will create almost 1,400 new UK jobs.  It will also create a further 3,500 highly skilled jobs in the supply chain and the wider UK economy.

Jaguar Land Rover is investing a further £1.5 billion to introduce an all-new, technically-advanced aluminium vehicle architecture in forthcoming models, beginning with the new Jaguar XE premium sedan to be manufactured from 2015 at the company’s Solihull facility, creating 1,700 new jobs.

This is the first Queen’s Award won by Jaguar Land Rover as a single company, but each of the brands has won six times in the past between 1967 and 2008.

In total, Jaguar Land Rover received over 200 international awards during 2013, for its products, its people and its business practices. It is also the only automotive company to hold all three Royal Warrants, as a supplier of goods and services to the households of HM The Queen, HRH The Duke of Edinburgh and HRH The Prince of Wales. 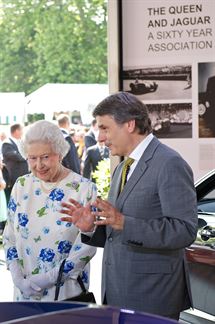