(PRESS RELEASE) PARIS, 25-Jul-2019 — /EuropaWire/ — Ivory Coast’s largest city Abidjan to order 200 Crossway Low Entry (LE) and 50 Crealis Natural Power (NP) 18-meter buses from the leader in natural gas buses IVECO BUS, the global bus brand of CNH Industrial (NYSE: CNHI / MI: CNHI). Abidjan, the economic capital of Ivory Coast keeps on investing in strengthening its public transit system by expanding its fleet of buses. As part of the delivery, the city of Abidjan will benefit from IVECO BUS’s latest Compressed Natural Gas (CNG) and Bus Rapid Transit (BRT) technologies. The Bus Rapid Transit (BRT) is a bus-based public transport system aimed at improving both the capacity and the reliability. IVECO BUS is the leader in the BRT solutions which helped the city of Abidjan to decide on investing in transforming the structure of its urban public transit system to high-capacity BRT.

Natural gas vehicles are seen as a real, mature and efficient solution for mass passenger transport and are considered an effective answer to environmental concerns. Among the benefits CNG vehicles offer are low running costs and a reduction in pollution and noise. Particularly, fine particle emissions are reduced to nearly zero, nitrogen oxide emissions by more than one third and noise level is reduced by half.

Attendees at the signing ceremony, which took place on July 5, 2019, were Amadou Kone, the Ivory Coast’s Minister of Transport, Meité Bouaké, Director of SOTRA, and Sylvain Blaise, Head of the Global Bus Division at CNH Industrial.

Considering Ivory Coast’s substantial reserves of natural gas both on land and off-shore, IVECO BUS’s high-value CNG buses have come as a natural choice for the country, which has become the first in Africa to order this type of buses.

With the new 250 more buses ordered from IVECO BUS, Abidjan’s IVECO BUS fleet now stands at more than 750 city buses, 100 of which are BRT running on CNG. 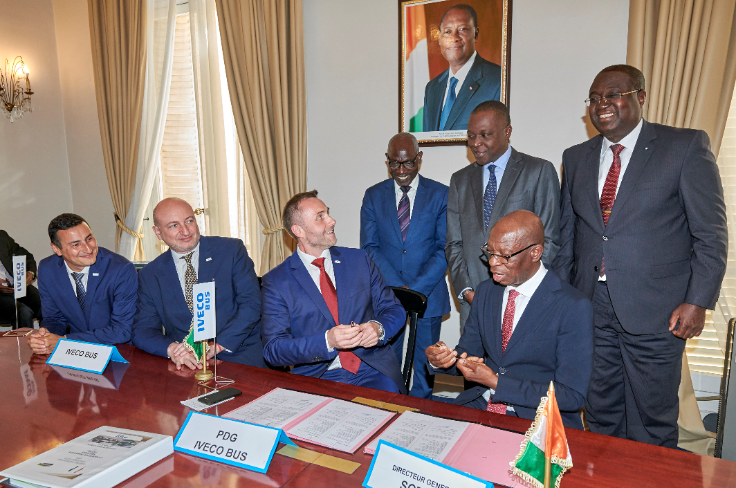 Attendees at the signing ceremony, which took place on July 5, 2019, were Amadou Kone, the Ivory Coast’s Minister of Transport, Meité Bouaké, Director of SOTRA, and Sylvain Blaise, Head of the Global Bus Division at CNH Industrial