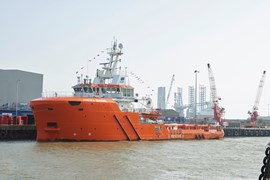 The ships, officially named Forties Sentinel and Sentinel Ranger, were built by Sentinel Marine and will support INEOS’ operations in the Breagh gas field

Rolle, Switzerland, 27-Oct-2017 — /EuropaWire/ —  INEOS Breagh has agreed to contract two state-of-the-art multi-role emergency response and rescue vessels (ERRVs) as part of a £110million investment project in its operations in the North Sea.

The ships, officially named Forties Sentinel and Sentinel Ranger, were built by Sentinel Marine and will support INEOS’ operations in the Breagh gas field by providing logistics and protecting workers. The 61 metre vessels are fully equipped with state of the art technology, built to a high specification to ensure the highest safety standards for passengers and crew.

Mervyn Williams, Supply Chain Manager said: ‘This agreement shows that we are committed to providing our workers with a safe environment. Both Forties Sentinel and Sentinel Ranger will carry out essential duties across the Breagh gas field and support our operations for years to come. INEOS is committed to its operations in the area and we are delighted to have chartered vessels from Sentinel Marine which have been designed and built to the highest of specifications.

‘As natural gas continues to provide 84% of UK household heating, operations in the North Sea are of paramount importance, these two new vessels will provide essential operations support in the field.’

Rory Deans, chief executive of Sentinel Marine, said: ‘These are a new breed of multi-role ERRVs which are streamlined and more efficient, built to the highest possible specifications with health and safety of crew, passengers and the marine environment at the forefront of the design. We are delighted that INEOS was able to join us for the naming ceremony in Great Yarmouth.’

INEOS has been working in the Breagh gas field, 65km of the North-Eastern coast of England in the North Sea since 2011, the gas field is one of the largest currently being explored in the Southern North Sea and is estimated to contain reserves of up to 19.8 billion M3 of Natural Gas.