New hotmelt adhesives resistant to both heat and water

12-11-2012 — /europawire.eu/ — High-performance hotmelt adhesives and silicones are among Henkel’s focal exhibits at this year’s electronica fair taking place in Munich from November 13 to 16. Henkel is appearing at the show with new molding products under the Macromelt brand for electrical applications, offering reliable, resilient and resistant solutions for even the toughest conditions. Also being featured is the Loctite SI 5700 silicone for luminant encapsulation.

Henkel invented Macromelt molding, and almost a quarter of a century ago was responsible for the first case in which a cable assembly was encapsulation-molded in an engine compartment of an automobile – manufactured by Citroën of France.

Since that time, molding products have continually improved, with ongoing adaptation to the specific conditions prevailing in the user industries. In addition to performance, increasing importance is being attached here to the sustainability of Henkel’s products. And indeed, these comprise up to 80 percent renewable raw materials.

Flame retardant and self-extinguishing
Macromelt Q 5361 is extremely flame resistant and also self-extinguishing. Consequently, this Henkel innovation has been assigned the best inflammability class, VO, qualifying it for many applications, including those where heat is a major factor. Macromelt Q 5361 extinguishes itself after a maximum of ten seconds, with no burning drops and a maximum post-fire glow time of 30 seconds.

Applications for which the new hotmelt is suitable include the sealing of cable assemblies/harnesses in vehicles and in solar and wind power generators.

As Macromelt OM 671 is not susceptible to cracking, it is suitable for the manufacture of, for example, large connectors such as those used in specialty vehicles – particularly those exposed to extreme temperature fluctuations, for example: winter service vehicles, agricultural machinery, municipal service vehicles and excavators.

Macromelt OM 653
New Macromelt OM 653 is particularly hydrolysis-resistant, i.e. able to withstand water and moisture. Every polyamide tends to undergo irreversible mechanical degradation if it is exposed over lengthy periods to wet, humid environments. By contrast, Macromelt OM 653 regains its original stability and tensile strength once the component has dried.

It can therefore be used at locations in the vehicle that are regularly exposed to the wet. Macromelt OM 653 is therefore suitable, for example, for attaching rear view cameras likely to come into contact with spray or rain water.

Loctite SI 5700 silicone
Henkel offers not only hotmelts for protecting electronic components, but also encapsulating resins for particularly tough specifications relating to temperature and media resistance. The latest development in the field of encapsulating compounds for optical applications, such as the sealing of luminants (LED arrays), is the highly transparent, two-component silicone Loctite SI 5700, which offers good adhesion on a wide range of substrates such as metals and plastics.

Moreover, the material’s high transparency is essentially permanent, with none of the yellowing frequently encountered in other technologies under exposure to elevated temperatures or UV light. The molding produced with this material is free of bubbles, enabling the manufacture of optically unblemished, high-quality products. This newly developed silicone is particularly suitable for the protection and sealing of LEDs, e.g. in modern street lights, façade lighting fixtures, advertising signs, illuminated lettering and other outdoor applications.

Henkel at electronica 2012
Experts from Henkel will be on hand at Stand 619 in Hall B4 to provide further information relating to all the company’s Macromelt and silicone innovations, as well as other adhesive and sealants technologies and surface treatment products. 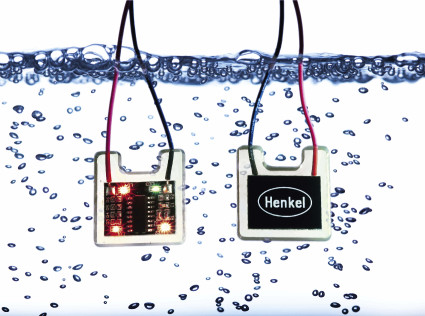