HEIDELBERG, 15-4-2015 — /EuropaWire/ — A new research group, established at Heidelberg University with funding from the German Research Foundation (DFG), is working on determining the mass of the elementary particle neutrino. The research, which began in April 2015, will receive funds of nearly two million euros over a three-year period. Beside physicists of Ruperto Carola researchers from the Max Planck Institute for Nuclear Physics in Heidelberg and the Universities of Mainz and Tübingen are part of the project. Prof. Dr. Christian Enss of the Kirchhoff Institute for Physics at Heidelberg University is the spokesperson for the “Neutrino Mass Determination by Electron Capture in Holmium-163“ (ECHo) DFG research group.

“For a long time the neutral elementary particle neutrino was thought to be massless, which turned out to be wrong. Since then, particle physicists all over the world have been pursuing the fundamental task of determining the neutrino’s tiny mass,” says Prof. Enss. To get closer to answering the question of the neutrino’s weight, the new DFG research group intends to develop and deploy a special detector technology known as the magnetic microcalorimeter. These detectors will be used in experiments to measure the decay spectrum of the radioactive element holmium-163 with extreme precision. As Prof. Enss explains, holmium-163 decays into dysprosium-163 when an electron from the holmium shell is “captured” by the nucleus. A neutrino is released at the same time. The missing energy at the end point of the decay spectrum should point to the mass of the neutrino. “We want to develop this approach over the long term to make it the most sensitive method of directly determining the mass of neutrinos,” says the Heidelberg physicist.

The researchers are also hoping to gain some new basic knowledge of elementary particles in general. “This new detector technology also holds a great deal of potential for further experiments in particle physics and related fields,” underscores Prof. Enss. Approximately 1.4 million euros of the total DFG funding is earmarked for Heidelberg arm of the ECHo DFG research group. 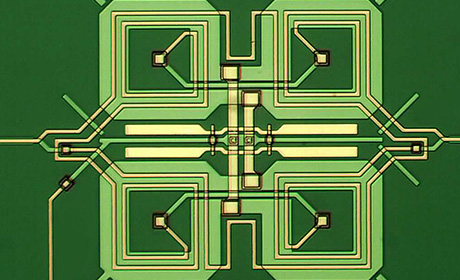