20-12-2012 — /europawire.eu/ — The UK’s amazing year of sport was reflected in attendances of over 75m at professional sports events during 2012, according to analysis by the Deloitte Sports Business Group.  This was reinforced by huge television audiences for the London 2012 Olympic and Paralympic Games, and other established annual sporting events.

Dan Jones, Partner in the Sports Business Group at Deloitte, commented:  “The demand and passion for sport in the UK was reflected in the 11 million tickets sold for the London 2012 Olympic and Paralympics Games.  When added to the 64m attendees at other professional UK sport events, there was a total of 75m visits to sporting events across the UK in 2012. The British public’s appetite for attending sporting events, in absolute terms and relative to its population size, is unmatched anywhere in the world.”

This year has also seen huge television viewing figures as sport dominated the list of most watched programmes.  Jones added:  “20m people watched Usain Bolt win the Olympic 100 metres in London, while there were over 6m viewers of Jonnie Peacock’s victory in the T44 100 metres at the Paralympic Games.”

Alan Switzer, Director in the Sports Business Group, commented:  “The diversity and quality of British horseracing is respected around the world and is reflected in the crowds that continue to flock to its racecourses for the top meetings. Nearly 11m people watched the last Grand National on the BBC before its move to Channel 4 for 2013.”

2012 was a golden year for tennis with Andy Murray winning Great Britain’s first Grand Slam since 1936, to add to his Olympic gold and silver medals.  Jones added:  “Wimbledon continues to be the country’s highest attended sporting event, while the ATP World Tour Finals in London go from strength to strength – together close to three quarters of a million people attended the two tournaments.  Andy Murray’s attempt to win the men’s title at Wimbledon was the most watched non-Olympic sporting event with a peak audience of 16.9m for the final.”

Some of the other findings from the analysis by Deloitte include: 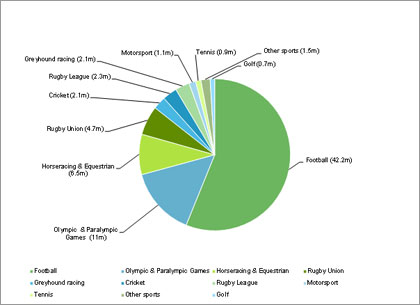 Top 10 attended sporting events in the United Kingdom in 2012

N.B. excludes Olympic and Paralympic events and also free sporting events. In a list which included those events for which admission was free, the London Marathon would be comfortably in first position, attracting an estimated 1m spectators each year.
The Open attendance includes practice days
Source: Event organisers, Deloitte analysis

About the Sports Business Group at Deloitte
Over the last 20 years Deloitte has developed a unique focus on the business of sport. Our specialist Sports Business Group offers a multi-disciplined expert service with dedicated people and skills capable of adding significant value to the business of sport. Whether it is benchmarking or strategic business reviews, operational turnarounds, revenue enhancement strategies or stadium/venue development plans, business planning, market and demand analysis, acquisitions, due diligence, expert witness, audits or tax planning; we have worked with more clubs, leagues, governing bodies, stadia developers, event organisers, commercial partners, financiers and investors than any other adviser.

Please see www.deloitte.co.uk/about for a detailed description of the legal structure of DTTL and its member firms.

The information contained in this press release is correct at the time of going to press.