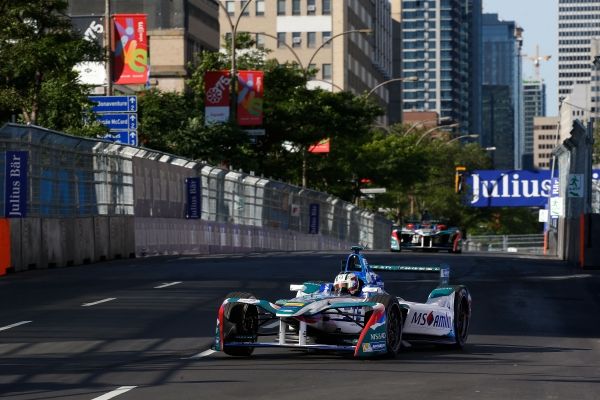 The MS Amlin Andretti team endured a tough Montreal ePrix (CAN), the final round of the 2016/17 FIA Formula E Championship. The team’s solitary points finish came with Robin Frijns’ (NED) ninth-place on Saturday, with António Félix da Costa (POR) unlucky not to score after being spun by a competitor. In a difficult race on Sunday, Frijns and Félix da Costa finished 13th and 15th respectively.

MUNICH, 31-Jul-2017 — /EuropaWire/ — The MS Amlin Andretti team endured a tough Montreal ePrix (CAN), the final round of the 2016/17 FIA Formula E Championship. The team’s solitary points finish came with Robin Frijns’ (NED) ninth-place on Saturday, with António Félix da Costa (POR) unlucky not to score after being spun by a competitor. In a difficult race on Sunday, Frijns and Félix da Costa finished 13th and 15th respectively. The four points earned over the weekend were enough to secure seventh in the teams’ standings. Canada’s inaugural ePrix saw large, enthusiastic crowds turn out to enjoy the all-electric spectacle, and provided two thrilling races. Lucas di Grassi (BRA) secured the drivers’ title.

In one of the most entertaining races in the history of FIA Formula E, Frijns was able to take MS Amlin Andretti’s third consecutive points finish. After P13 (Frijns) and P15 (Félix da Costa) in qualifying, both drivers showed their racing instinct in the opening exchanges, avoiding the incidents around them and running within their energy targets. When the Qualcomm Safety Car BMW i8 was called to the track to allow marshals to recover a stranded car just before halfway, both cars came to the box. Frijns raced well, and as cars dropped out or suffered delays in an action-packed spectacle, he climbed into the top-10. Félix da Costa was unfortunate to miss out on the points: a spin after contact with Nelson Piquet (BRA) left the Portuguese driver frustrated in 15th place.

The final race of FIA Formula E’s third season was a disappointing one for the MS Amlin Andretti team. Qualifying was not an improvement over Saturday – 15th for Félix da Costa and 16th for Frijns. In chaotic opening battles, both drivers were lucky to avoid damaging their cars, but as the race settled found they lacked pace on the demanding Canadian circuit. After the mandatory pitstop, the situation did not improve, and when a full course yellow neutralised the field with two laps remaining, Frijns was 13th and Félix da Costa 15th.

António Félix da Costa, MS Amlin Andretti: “In race one, I was doing well on energy but when the full course yellow came, it actually brought everyone back on the same page so all the hard work we did in the beginning of the race was for nothing. We were still running close to the points and looking okay but we got tapped and that was the end of the race. The second race, we had a good start again, but we had no performance at all in the first car. In the first stint I was really struggling to make the tyres work so I was dropping back gradually, not really fighting anyone. I tried to look after my energy and create a plan B but the lack of performance really didn’t help ups. It was a tough race for the MS Amlin Andretti team but I’m glad we kept seventh in the championship. We need to regroup with the guys and I’m looking forward to having some time off. We will start again in Season 4.”

Robin Frijns, MS Amlin Andretti: “We had good pace, and the energy consumption was really good on Saturday. The MS Amlin Andretti team looked good. I think we could have finished seventh or eighth if the safety car didn’t come out, but ninth and some points is good for the team. On Sunday, we had a difficult start with the crash in front of me, which I couldn’t really avoid, so I ended up in the back of the field. I was managing my energy quite well and was hoping something would happen at the end of the race. Again we showed good efficiency and I could go further into the race than most of the field. I had some energy left at the end, but unfortunately I couldn’t really use it.”

The BMW i Vehicle Fleet