Deutsche Telekom and EWE to expand its fiber-optic network 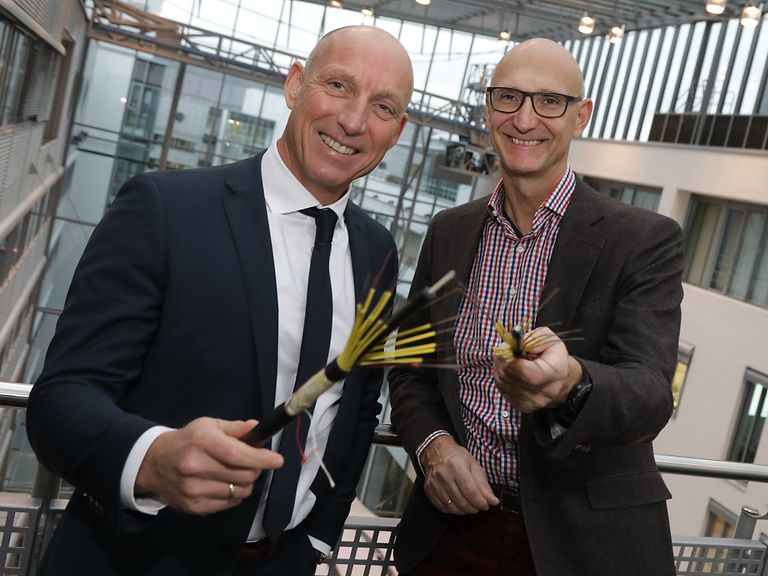 BONN, 15-Dec-2017 — /EuropaWire/ — A major step toward the gigabit society is being taken in Germany’s northwest: Deutsche Telekom and EWE are planning to expand the region’s fiber-optic network and to directly connect over a million private households to it, using FTTB/FTTH. The two companies plan to launch the effort by establishing their first joint venture, and today they signed a declaration of intent to that end.

Deutsche Telekom and EWE plan to work together in the German states of Lower Saxony, North Rhine-Westphalia and Bremen, with each of the two partners receiving a 50 percent stake in the planned joint venture. The ten-year time frame for the network expansion calls for the joint venture to invest up to two billion euros, with a priority on rural areas, and with operations scheduled to begin in mid-2018. The joint venture still has to be approved by the German Federal Cartel Office.

“By working with a strong partner, we will be able to bring state-of-the-art fast Internet access to even more people in our region,” explained Michael Heidkamp, EWE Director of Sales and Marketing. “This joint venture will enable us to make faster progress toward a complete-coverage fiber-optic network, and thereby to set new standards in state-of-the-art broadband infrastructure.”

“The cooperation will make the fiber-optic expansion considerably more cost-effective, and it will help us make an important contribution to the region’s infrastructure competition,” noted Tim Höttges, Deutsche Telekom CEO. The joint venture plans to make the resulting accesses available to third parties, for use at commercial terms. “The key is that FTTB and FTTH accesses will no longer be regulated. That is a central prerequisite for the joint project, and we are having talks with the Federal Network Agency,” Höttges added.

The joint venture plans to create a state-of-the-art infrastructure that will be offered for use to other telecommunications-services providers. EWE and Deutsche Telekom, and other providers, will all be able to use the new network for their own sales and marketing efforts. As a result, customers will be able to choose from a range of stable, ultrafast accesses. The two companies plan to continue working separately in the area of services for business customers. In addition, the companies’ ownership stakes in the fiber-optic network currently in place will not change. The new network, including both its street and house connections, will become the property of the new company, which will have its headquarters in northwest Germany.