Deutsche Post DHL Group reports its profit climbed by 7.2% to EUR 3.74 billion in the 2017 financial year 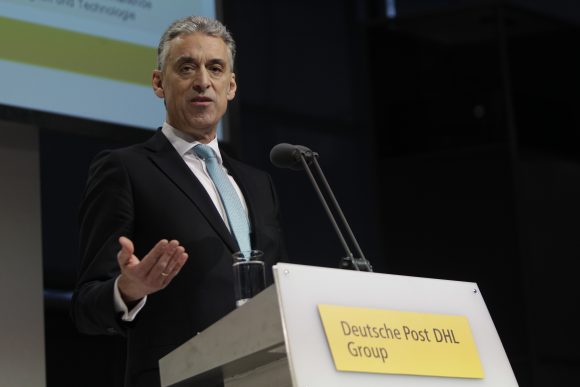 CEO Frank Appel: “In 2017 we took another major step on the road to achieving our strategic and financial goals for 2020.”

BONN, 08-Mar-2018 — /EuropaWire/ — Deutsche Post DHL Group can look back on another very good financial year. The Group’s operating profit climbed by 7.2% to EUR 3.74 billion in the 2017 financial year. With this, the company attained its earnings target of around EUR 3.75 billion. As forecast, the Post – eCommerce – Parcel (PeP) division contributed EUR 1.5 billion to operating profit. Also as expected, the DHL divisions generated total EBIT of EUR 2.6 billion. Group revenue was up by 5.4% to EUR 60.4 billion, with all four divisions contributing to the increase. The DHL Express division and the German and international Parcel and eCommerce businesses continued to see particularly dynamic growth.

“Thanks to successful business development in all four divisions, especially outside Germany, our company has registered another very good year. In 2017 we took another major step on the road to achieving our strategic and financial goals for 2020. With our international focus and our firm orientation towards the fast-growing e-commerce market, we implemented the right measures early on and are now positioned better than ever for future growth. At the same time, we are increasingly leveraging the digitalization opportunities that present themselves in all four divisions and expanding our foundation for a successful future,” said Frank Appel, CEO of Deutsche Post DHL Group.

Deutsche Post DHL Group has applied the IFRS 16 accounting standard with effect from the beginning of 2018. As announced, this change in the recognition of leases will result in an increase in Group EBIT of about EUR 150 million per financial year. It is also expected that the solid pace of economic expansion, further business growth and operational improvements in the individual divisions in particular will lead to increased earnings in 2018: Deutsche Post DHL Group forecasts a rise in EBIT to approximately EUR 4.15 billion. The PeP division is expected to contribute around EUR 1.5 billion to this total. For the DHL divisions, the company anticipates an EBIT contribution of around EUR 3.0 billion.

Due to the change effected by IFRS 16, the company refined its medium-term earnings targets and is specifying absolute figures in this area for the first time: Deutsche Post DHL Group expects EBIT of more than EUR 5 billion in the 2020 financial year, to which PeP will contribute some EUR 1.7 billion and the DHL divisions approximately EUR 3.7 billion.

The increase in revenue and earnings in 2017 is also reflected in improved net profit for the year. Consolidated net profit after non-controlling interests was EUR 2.7 billion (2016: EUR 2.6 billion). Basic earnings per share saw a corresponding increase from EUR 2.19 in 2016 to EUR 2.24 in 2017. Net profit increased at a slower rate than EBIT, due primarily to a higher tax rate. After declining to 11.2% in the previous year due to one-off effects, the tax rate was 14.3% in 2017.

In light of the Group’s positive earnings performance, the Board of Management and the Supervisory Board will propose a dividend increase of 9.5% to EUR 1.15 per share at the Annual General Meeting on April 24, 2018. If approved by the shareholders, the total payout would be approximately EUR 1.4 billion, reflecting a payout ratio of 52%. This is within the range of 40% to 60% communicated in the company’s finance strategy introduced in 2010.

Deutsche Post DHL Group invested heavily in all four divisions once again in 2017. The company is thus reinforcing its foundation so that it can continue its profitable growth trajectory in the future. For example, the company expanded its parcel infrastructure both in Germany and internationally. The company also expanded and modernized the hubs and aircraft fleet at DHL Express. As planned, capital expenditure at DPDHL Group amounted to EUR 2.3 billion in 2017 (+9.8%); the company invested well over EUR 1 billion in the final quarter alone. The Group is forecasting capital expenditure of around EUR 2.5 billion in 2018.

The improvement in the Group’s operating performance in 2017 also had a positive effect on cash generation. However, both the cash flow figures for 2017 and the reference values for 2016 were impacted by one-off effects. Operating cash flow in 2017 increased by EUR 858 million to EUR 3.3 billion. This reflects the outflow of EUR 495 million for the funding of pension obligations in the United Kingdom. The prior-year figure included the funding of pension obligations in Germany in the amount of EUR 1.0 billion. Free cash flow in 2017 improved by EUR 988 million to EUR 1.4 billion. After adjusting for the aforementioned funding of pension obligations, free cash flow came in at EUR 1.9 billion, exceeding the forecast. The sale of Williams Lea Tag Group had a positive effect in 2017, resulting in a net inflow of EUR 286 million. The prior-year figure reflected an outflow of EUR 278 million for the acquisition of UK Mail. For 2018, Deutsche Post DHL Group forecasts free cash flow of more than EUR 1.5 billion.

Revenue at Parcel Germany increased by 4.3%. PeP delivered more than 1.3 billion parcels in Germany in 2017 overall, an increase of 7.8% and a new record. Revenue in the eCommerce business unit climbed by 10.3%. However, the most substantial gain was posted by Parcel Europe, where revenue grew by 65.4%. A key driver of the increase was the first-time inclusion of the UK Mail results (2017 revenue: EUR 536 million). Revenue at Parcel Europe also increased by a substantial 18.3% after adjusting for this effect, reflecting the steady development and expansion of the parcel infrastructure in Europe. Parcel Europe now operates in 26 countries (including Germany) following the recent expansion of its activities to include the Bulgarian, Irish, Croatian and Romanian markets.

In the Post business unit, revenue was stable at EUR 9.7 billion (-0.1%). The structural volume declines in the Post business were largely offset in 2017 by good development in the Dialogue Marketing segment and additional mailing volumes as a result of the elections in Germany.

In the PeP division, operating profit increased by 3.9% over the prior-year level to EUR 1.5 billion. The principal factors contributing to the increase were growth in the German Parcel business, stable Post revenues and disciplined cost management, while earnings growth was held back by further investments in the international Parcel network and the eCommerce business.

The upward revenue and earnings trend in the Express division continued in 2017. Revenue rose by 9.5% on the prior year to EUR 15.0 billion. Particularly encouraging was the fact that the division registered growth across all regions. This dynamic performance was driven once again by the international time-definite (TDI) delivery business, where daily volumes increased by 9.9% year on year.

The volume increase will enable the division to utilize its unique global express network even more efficiently. Operating profit grew by 12.4% to EUR 1.7 billion on the back of strict yield management and continuous improvements in the network. The operating margin rose to 11.5%, up from 11.2% in the prior year.

The performance of Global Forwarding, Freight improved over the course of the year. Revenue increased by 5.4% to EUR 14.5 billion in 2017. The division registered significant volume growth in both air and ocean freight. Road and rail transport also developed positively in Europe, particularly in Germany.

The division’s EBIT increased by 3.5% to EUR 297 million, although margins in air and ocean freight came under appreciable pressure particularly in the first half of 2017 due to the considerable increase in freight rates. In the second half of the year, the division was increasingly able to pass on the higher prices to its customers and with this significantly improve earnings in the last six months.

Revenue in the Supply Chain division increased by 1.4% to EUR 14.2 billion in 2017. Adjusted for negative currency effects, the year-on-year increase in revenue amounted to 4.6%. Once again, Supply Chain successfully generated new business. The division concluded additional contracts worth EUR 1.5 billion with both new and existing customers during 2017.

Operating profit declined by 3.0% to EUR 555 million, as the positive effects from the expanding business and the successful conclusion of the division’s optimization program were not sufficient to offset the one-off effect resulting from a write-down of customer relationship assets. Adjusting for this negative effect, EBIT improved by 2.6%.

Deutsche Post DHL Group registered an increase of 4.5% in total Group revenue to EUR 16.1 billion in the fourth quarter. All four divisions contributed to the improvement. Operating profit increased at an even greater rate, advancing by 6.3% to EUR 1.2 billion. Consolidated net profit after non-controlling interests declined by 0.5% to EUR 837 million in the fourth quarter due to a higher tax rate. Basic earnings per share decreased to EUR 0.69 in line with the decline in net profit.