DCNS: The completion of the last raft-mounted gearbox for the Indian anti-submarine corvettes marks the successful culmination of the transfer of technology process

The completion of the last raft-mounted gearbox for the Indian anti-submarine corvettes marks the successful culmination of the transfer of technology process.

Paris, France, 30-7-2014 — /EuropaWire/ — At the end of May 2014, the teams of DCNS and its Indian industrial partner Walchandnagar Industries Limited (WIL) wrote the final page of the P28 adventure that began in 2006. The acceptance without reserve of the 8th gearbox (FOS3 starboard) by the prime contractor Garden Reach Shipbuilding & Engineering Ltd (GRSE) is the last milestone of the raft-mounted gearbox design and integration contract for the propulsion system of the four P28 anti-submarine corvettes ordered by the Indian Navy to GRSE.

Major involvement of both partners

If the results of the noise and vibration measurements obtained during the 8th factory acceptance fully meet the contractual requirements, they reflect the success of the management of the transfer of technology and that of the cooperation between the French and Indian partners. The outcome of the contract is the fruit of the involvement of the DCNS teams which, for several years, have assisted WIL’s teams in the assembly of the units and in the conduct of the tests, associated with WIL’s ability to achieve the level of technical skill established within the framework of the transfer of technology.

In 2006, DCNS was awarded a contract by GRSE for the overall engineering (physical integration of the propulsion system) and supply of raft-mounted gearboxes for four ships, in collaboration with the Indian industrialist WIL, with a view to gradually transferring production to the local site. The first four rafts were manufactured by DCNS, in France, with the remaining four being produced by WIL, in India, as part of the transfer of technology. The complete raft weighs-in at 70 tonnes. With two fitted per ship, each carries two diesel engines directly coupled to the gearbox, which engages with the propeller shaft.

Since 2008, DCNS has been involved in the programme for the four 2,500-tonne anti-submarine corvettes for the Indian Navy.

The success achieved strengthens DCNS’ position in India for current or future projects. 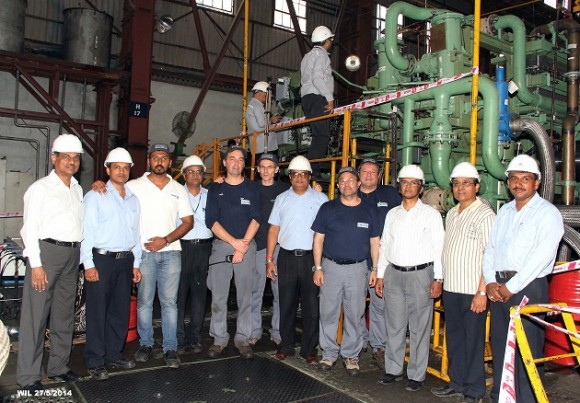 DCNS: The completion of the last raft-mounted gearbox for the Indian anti-submarine corvettes marks the successful culmination of the transfer of technology process