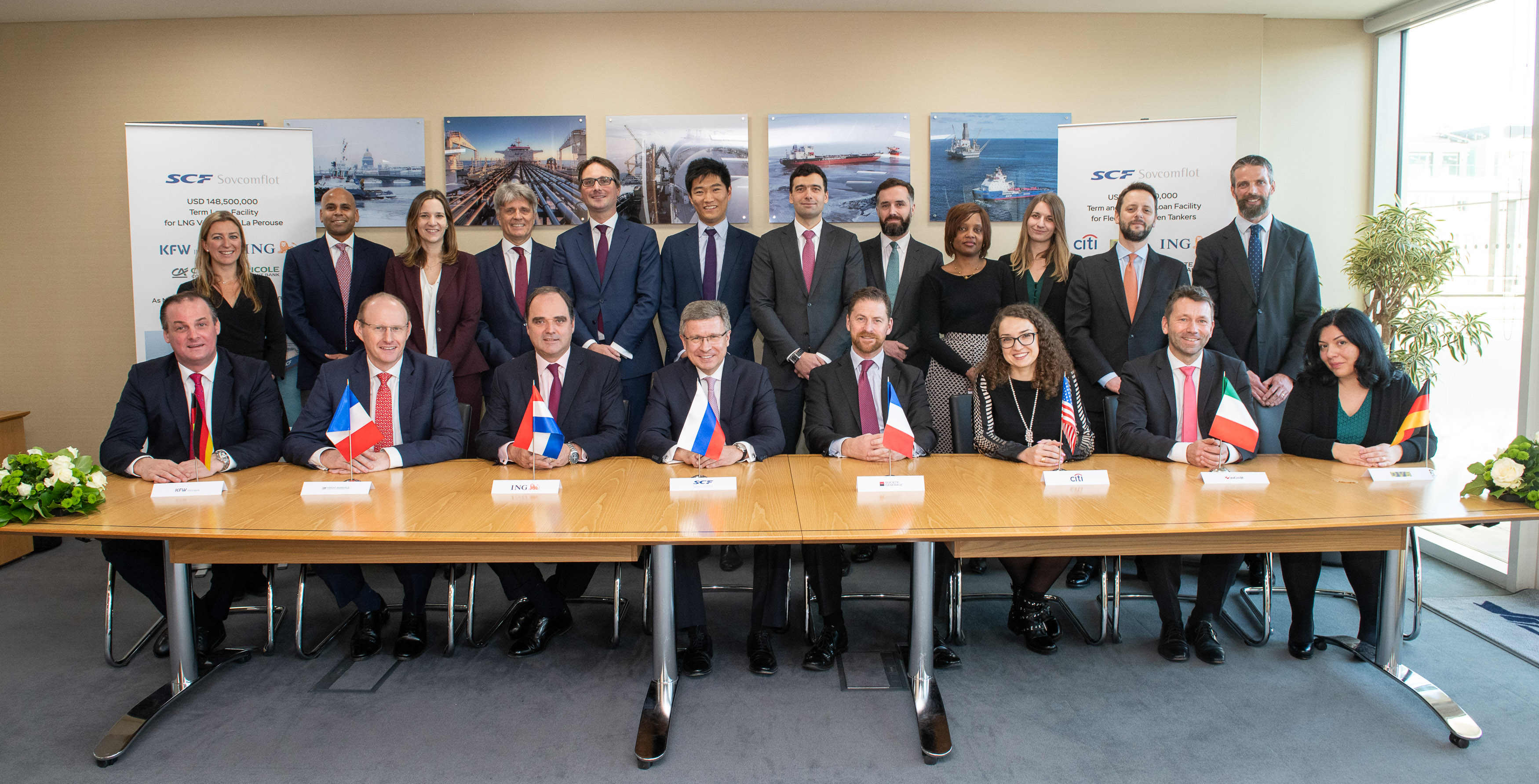 Nikolay Kolesnikov, Senior Executive Vice-President and CFO of Sovcomflot (sitting in the centre) together with the signees from KfW IPEX-Bank, Credit Agricole, ING Bank, Societe Generale, Citibank, UniCredit, and DVB Bank (sitting, from left to right), with which Sovcomflot signed two financing deals for a total of over USD 410 mn in the past four weeks.

The credit facility is being used for the early refinancing of a balloon payment due on one of the Group’s tanker loan facilities maturing in 2019, whilst it also provides an additional line of available credit for general corporate purposes. The loan benefits from a favourable long-term tenor, competitive pricing, as well as a flexible revolving mechanism allowing for funds to be drawn and repaid as required.

“The completion of this credit facility marks the successful finalisation of SCF’s 2018 financing plan, with total new debt capital raised this year amounting to circa USD 900 million, which allows us to fully address the Group’s mid-term financing requirements, to optimise and smooth-out its debt repayment profile, and to build up an additional liquidity cushion.

“We are grateful to our long-standing financial partners for their continued support of SCF’s business. This new loan agreement clearly demonstrates the confidence of international lenders in the robustness of SCF Group’s business model amid continuing market volatility.”

Sovcomflot (SCF Group) is one of the world’s leading energy shipping companies, specialising in the transportation of crude oil, petroleum products, and liquefied gas, as well as the servicing of offshore oil and gas exploration and production. The company’s fleet includes 147 vessels with a total deadweight of 12.8 million tonnes. 80 vessels have an ice class.

Sovcomflot is involved in servicing large oil and gas projects in Russia and around the world: Sakhalin-1; Sakhalin-2; Varandey; Prirazlomnoye; Novy Port; Yamal LNG, and Tangguh (Indonesia). The company is headquartered in Saint Petersburg, with offices in Moscow, Novorossiysk, Murmansk, Vladivostok, Yuzhno-Sakhalinsk, London, Limassol, and Dubai.

In February 2018, SCF Group signed a USD 106 million project financing agreement for up to 14 years with Sberbank. The funds were used towards financing the construction of an Arctic shuttle tanker for the Novy Port project, under a long-term agreement with Gazprom Neft.

In November 2018, SCF Group signed a USD 149 million credit facility for up to 10 years with a consortium of three leading international banks, comprising: ING Bank; KfW IPEX-Bank, and Credit Agricole. The funds were used towards financing the construction of an LNG carrier that will operate on long-term charters with Total.