6-12-2012 — /europawire.eu/ — On Thursday, 29th November, the magazines InfoPower and InfoEnviro acknowledged the efforts of a number of companies in the area of Energy and the Environment. Alstom Wind was one of the stars of this first edition, winning the award for Most notable implication in Spain by a foreign company in the Energy Sector and/or Environment.

Miquel Cabré, who participated in the name of 4,000 Alstom Spain employees and 1,500 Alstom Wind staff worldwide, received the prize which was awarded by the Managing Director of IDAE, Fidel Pérez Montes.

The advisory committee, the jury and the 6,000 internet users who voted online particularly appreciated the technological innovation and the industrial implication carried out by Alstom in Spain.

In the summer of 2007, Alstom began its commitment to the wind power business, giving way to the birth of Alstom Wind. During these five years, Alstom Wind´s staff doubled and the company has launched some of the industry’s most innovative technologies. Of particular merit is the development of one of the world´s largest wind turbines. With a unit capacity of 6 MW, the offshore wind turbine HaliadeTM 150 has a rotor diameter of 150 meters and is equipped with blades of 73.5 m in length. Each of these wind turbines will be able to generate the energy needed to power 5,000 homes.

Alstom Wind has located its global headquarters in Spain.  Furthermore it has 1 R&D centre and 3 industrial plants in various locations around the country. In total, Alstom Wind employs more than 1,000 people in Spain (70% of Alstom Wind´s workforce). 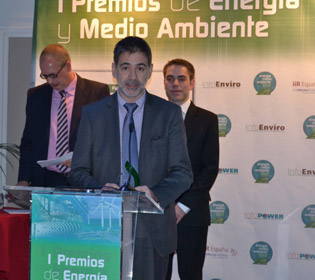 Miquel Cabré, who participated in the name of 4,000 Alstom Spain employees and 1,500 Alstom Wind staff worldwide, received the prize