Toulouse, France, 17-12-2014 — /EuropaWire/ — AirAsia X, the long haul affiliate of Asia’s largest low cost airline, has placed a firm order with Airbus for 55 A330neo aircraft. This is the largest single order to date for the best-selling A330 Family and reaffirms AirAsia X’s position as the biggest A330 airline customer worldwide, having now ordered a total of 91 aircraft. The announcement covers the firming up of a Memorandum of Understanding (MOU) for 50 A330neo signed during the Farnborough Air Show in July 2014, plus an additional five aircraft. Deliveries of the newly-ordered aircraft will begin in 2018.

“This latest deal with Airbus will enable AirAsia X to consolidate its growth rate in 2015-2017 before ramping up deliveries from 2018 onwards.” said Tan Sri Tony Fernandes, Co-Founder and Director of AirAsia X. “The A330 has proven itself to be exactly the right aircraft for our business model, combining low operating costs, long range flying capability and high levels of comfort. We are extremely excited about the even greater levels of efficiency that will come with the A330neo, which will play a key role in enabling AirAsia X to maintain its position as the long haul low cost leader.”

“This order from AirAsia X is a major endorsement of the A330neo as the most cost-efficient aircraft in its size category,” said John Leahy, Chief Operating Officer, Customers, Airbus. “With the A330neo in its fleet, AirAsia X will benefit from even lower operating costs as it expands it network and reach, enabling more people to fly further more often than ever before. We look forward to AirAsia X becoming one of the first operators of the latest version of the highly successful A330.”

Building on the proven economics, versatility and reliability of the A330ceo, the A330neo will incorporate latest generation Rolls-Royce Trent 7000 engines, aerodynamic enhancements and new cabin features. These advances will make the aircraft the most cost-efficient in its size category, with a reduction in fuel consumption of 14% per seat, an increase in non-stop flying range of up to 400 nautical miles and the lowest possible maintenance costs.

The A330 Family is part of the world’s most modern and comprehensive widebody product line, which also includes the larger A350 XWB and double deck A380. Together, the various versions of the aircraft efficiently cover all airline widebody requirements for regional, medium and long haul operations, seating from 250 to over 500 passengers and sharing unique levels of operational commonality. 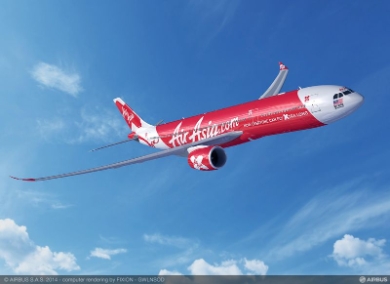