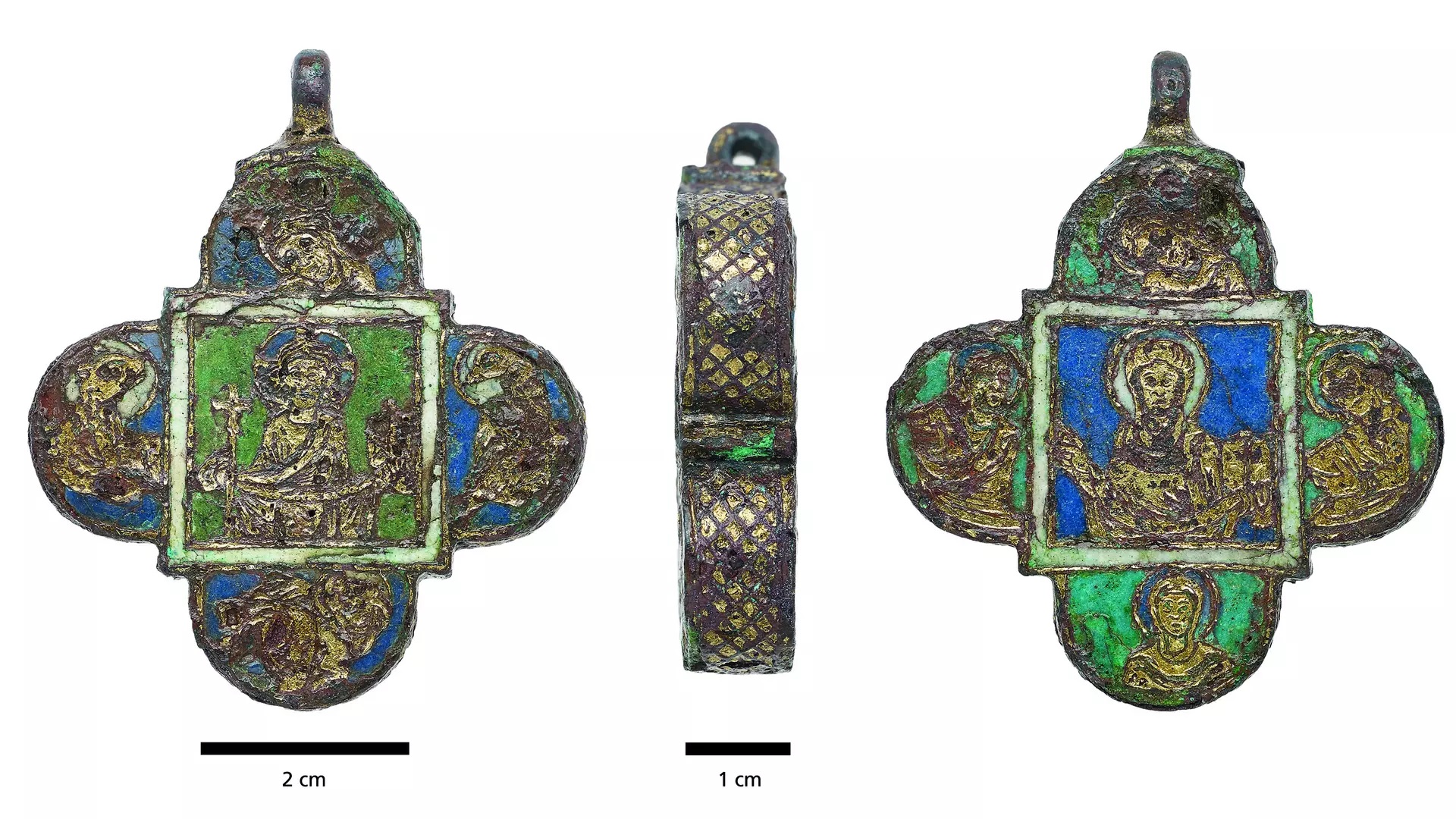 The restored reliquary. Outside it is decorated with images of Jesus and Mary

(PRESS RELEASE) MUNICH, 5-Jan-2023 — /EuropaWire/ — Technical University of Munich (TUM), one of Europe’s leading universities with focus on the engineering sciences, natural sciences, life sciences, medicine, and social sciences, has announced that an interdisciplinary research team led by the Leibniz-Zentrum für Archäologie (LEIZA) has used non-destructive examination techniques, including the Research Neutron Source Heinz Maier-Leibnitz and Prompt Gamma Activation Analysis, to study a gold-plated pendant found in 2008 in Mainz, Germany. The pendant, which is thought to be 800 years old, was discovered in a medieval refuse pit. The team found five packets containing bone fragments inside the pendant, which are thought to be religious relics. The non-destructive nature of the examination methods was necessary because the pendant, which has been damaged by corrosion, would be destroyed if it were opened.

During restoration, he discovered a fragment of cord in the pendant’s attachment loop, which on closer examination turned out to be silk. “This is the first proof that this kind of pendant may possibly have been worn around the neck on a silk cord. The neutron tomography at TUM meant we could additionally measure the thread size and the string separations of the textiles inside the pendant,” says Matthias Heinzel, who works as a restorer at LEIZA.

In 500 hours of work, Heinzel meticulously removed corrosion deposits from the find. Initial investigations showed that the approximately 6 cm high, 6 cm wide and 1 cm thick pendant was presumably a storage container for religious relics. Since the organic content of the pendant was not visible in the first x-ray images, investigation was continued using neutrons from the FRM II: Dr. Burkhard Schillinger of the Technical University of Munich (TUM) conducted the neutron tomography using the ANTARES instrument; this rendered the individual textile packages inside containing the bone fragments. The researchers determined individual elements of the sample by triggering them to emit characteristic gamma radiation at the PGAA using neutrons. 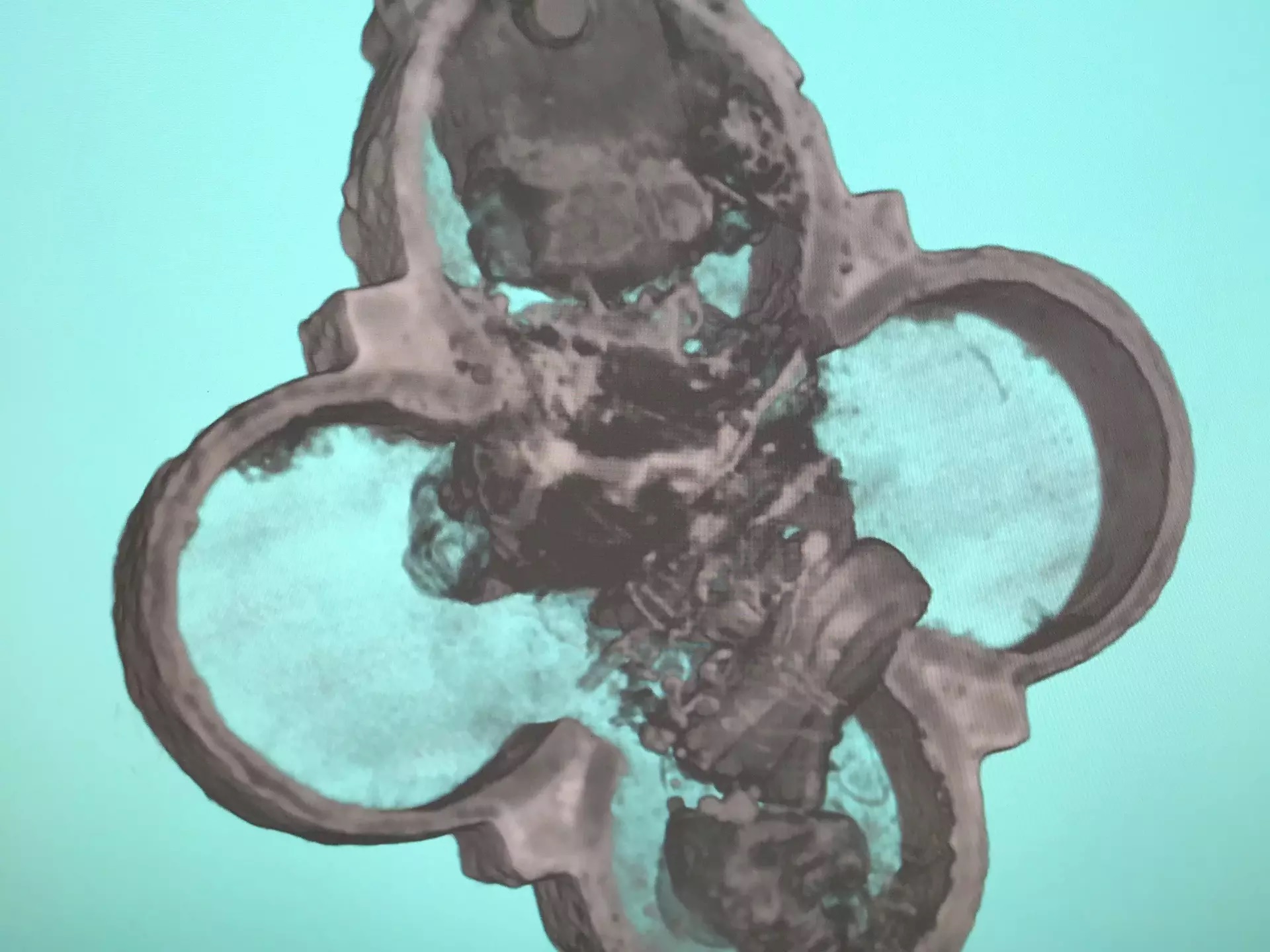 Neutron tomography shows the interior of the relic pendant.

“We can’t say whether or not these bone splinters are from a saint and, if so, which one. Usually relic packages contain a strip of parchment indicating the name of the saint. In this case, however, we unfortunately can’t see one. As an archaeological research institute of the Leibniz Association, we consider it our duty to preserve the object in its historical authenticity as completely as possible for future generations and to leverage the modern opportunities of non-destructive investigation at the Technical University of Munich,” says Heinzel. 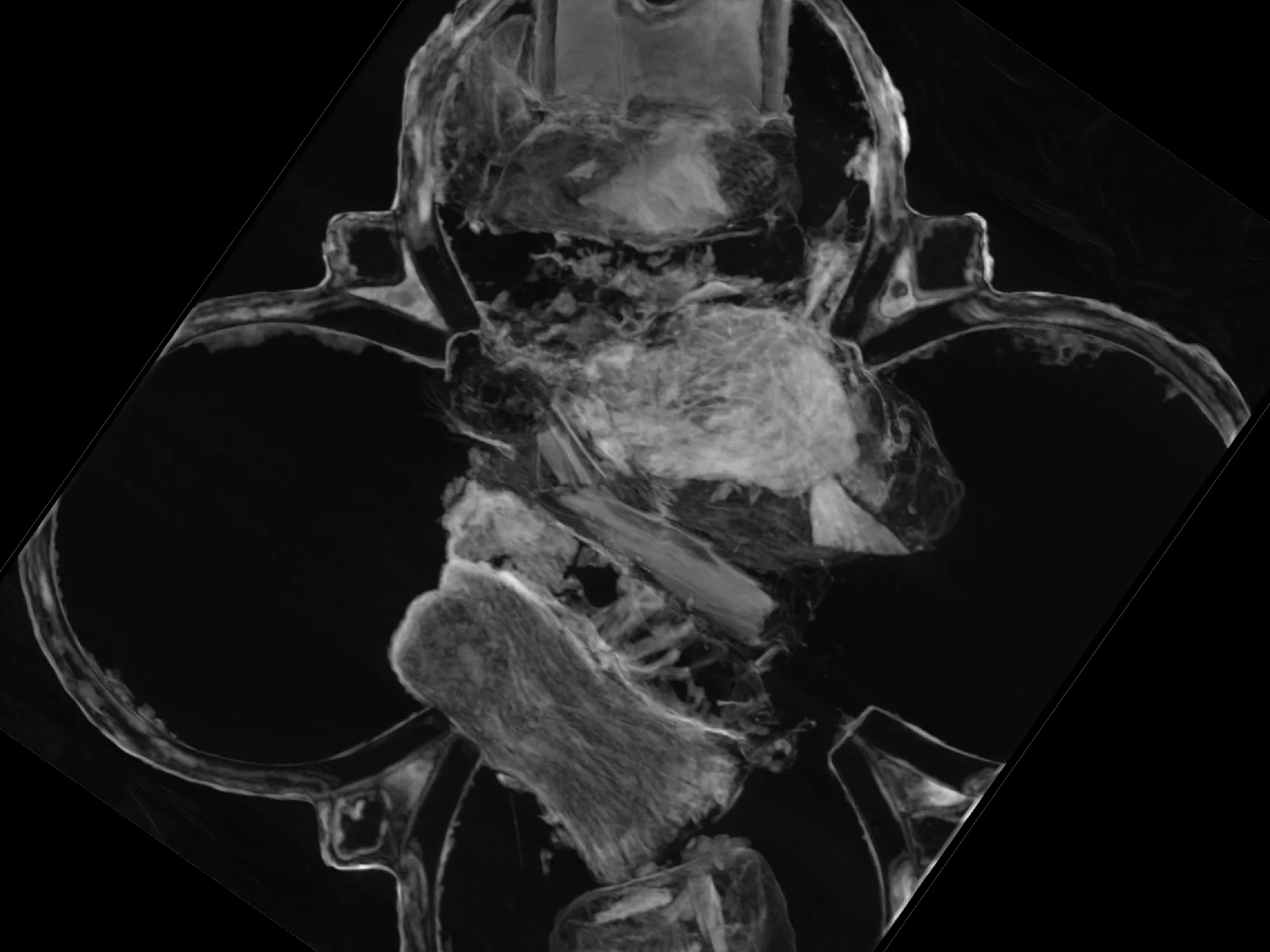 Five relic packages can be seen inside.

Only three other relic containers of this type, referred to as phylacteries, are known to date. The term phylactery is derived from the Greek term for safekeeping or protection. Their owners wore them on their bodies, usually hung around the neck. The exterior of the gold-plated pendant made of copper shows pictures of Jesus, the four Evangelists, Maria and four female saints in enamel. The researchers dated the pendant to the late 12th century and attribute it to a workshop in Hildesheim, Lower Saxony, in Germany. The find is in the possession of the General Directorate for Cultural Inheritance (Generaldirektion kulturelles Erbe or GDKE), at the State Archeological Directorate of Mainz (Direktion Landesarchäologie Mainz) and can be viewed for the time being in the medieval exhibition “AUREA MAGONTIA – Mainz in the Middle Ages” at the Mainz State Museum.

Contacts to this article: